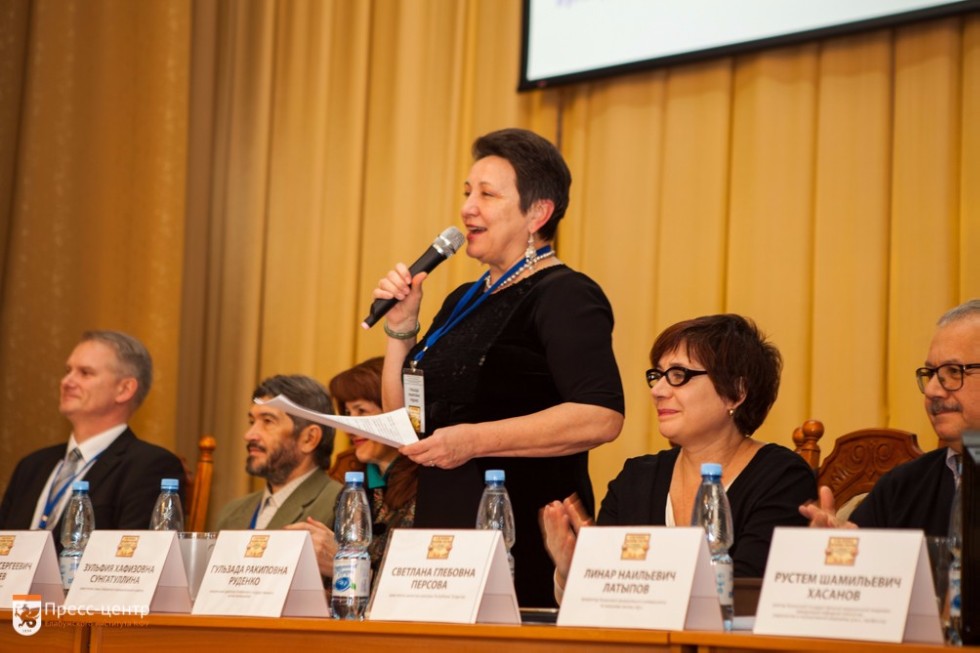 The participants of the scientific-practical conference in Yelabuga Institute of Kazan Federal University managed "To embrace across the generations" the artist Shishkin and academician Bekhterev.

The conference “The Greatness of Russia is in their names " has brought together 167 participants – scientists, researchers, heads of higher education institutions and the museums, teachers and students. Among the honored guests there were more than three tens descendants of the singer of the Russian wood Ivan Shishkin and the founder of psychiatry Vladimir Bekhterev. Guests have arrived from different cities of Russia and Finland, other representatives of the well-known Russian surnames have sent video congratulations from the Czech Republic, Serbia and the USA.

The event was organized by the Yelabuga state memorial estate and Yelabuga Institute.

In a frosty sunny day on the University square, the guests were welcomed by the traditional celebration of Tatyana's day and got a lot of positive energy. Here guests were treated with hot tea and pancakes, games and entertainments were started. Picturesque customs of a student's brotherhood especially impressed the Finnish lawyer Petri Oulasmaa who visited a home of the famous great-grandfather artist with the younger son.

Linar Latypov, the vice rector of KFU for external relations, greeted the participants of a scientific and practical conference on behalf of the rector of the Kazan federal university Ilshat Gafurov. He noted that really interested and not indifferent friends gathered in the assembly hall. "Yelabuga – a kiss on a frost", – having paraphrased V. Khlebnikov, Linar Nailyevich neatly characterized a meeting. The city is obliged by much to Ilshat Rafkatovich who for years of management of Yelabuga carried out revolutionary changes in economy and cultural life, made a big contribution to the development of museums. Today, the same tremendous changes occur in the University, changing University paradigm in General, said Linar Latypov.

The director of the Yelabuga institute Elena Merzon emphasized the importance of succession of generations. In student's years the main equity – knowledge, therefore it is so important that the scientific program of a conference is implemented in the historical building of the branch of Kazan Federal University.

The deputy minister of culture Svetlana Persova has allocated that presence of descendants of the famous people is very valuable, it is live history which fills an event with special sense. Svetlana Glebovna was supported by Natalya Gramolina, the member of presidium of the International council of the museums, the deputy director of memorial estate V. D. Polenova. Natalya Nikolaevna has stated the interesting idea – embracing descendants of great people, we alive touch their great ancestors. When she has finished a performance, Oulasmaa Sr. has hurried to imprison the representative of a family of Polenov in embraces that through centuries the virtual meeting of outstanding Russian artists has taken place.

The touching moments don't belittle the scientific importance of a conference where 36 reports have been submitted. The doctor of medical sciences, professor Rady Yesin (Institute of fundamental medicine and biology of KFU), the research associate of research laboratory "Clinical Linguistics", has disclosed key aspects of interaction "the doctor - the patient" during an era of high technologies.

He provided a number of diseases which don't give in to visual diagnostics, and are determined on the basis of the report of the patient. In this situation the doctor needs to formulate correctly questions, to use high-quality tests, including foreign. Therefore "The clinical linguistics" included in a research of philologists of KFU who help to increase the accuracy of the translation and interpretation of questionnaires.

Interest of colleagues was attracted by performances of the doctor of historical sciences, professor Inga Maslova (The Yelabuga institute of KFU), the doctor of pedagogical sciences, professor Faina Ratner (Institute of the international relations, history and oriental studies of KFU), the doctor of psychological sciences, professor Leonid Popov (Institute of psychology and education of KFU). Speakers have once again proved that heritage of those, "in whose names is greatness of Russia", doesn't have become outdated. It concerns not only the masterpieces of Shishkin which have entered a treasury of world culture, but also scientific potential of works of Bekhterev for medicine of the 21st century. For example, today on their basis means from a present scourge – information stress are developed.

"All our scientific and practical, research actions take place in the walls of the institute, – has shared in an interview Gulzada Rudenko, the director of the Yelabuga historical and architectural memorial estate. These are our joint projects. We carry out scientific work too, but there are scientists who are engaged in it thoroughly, fundamentally. There is a wish that our students obtained unique, exclusive, almost significant information which they won't be able to find in a textbook. Therefore we are always in close cooperation with KFU ".

Source of information: Nadezhda Hamidullina, press-service of the Yelabuga institute of KFU