Week of science started at the Yelabuga institute of KFU 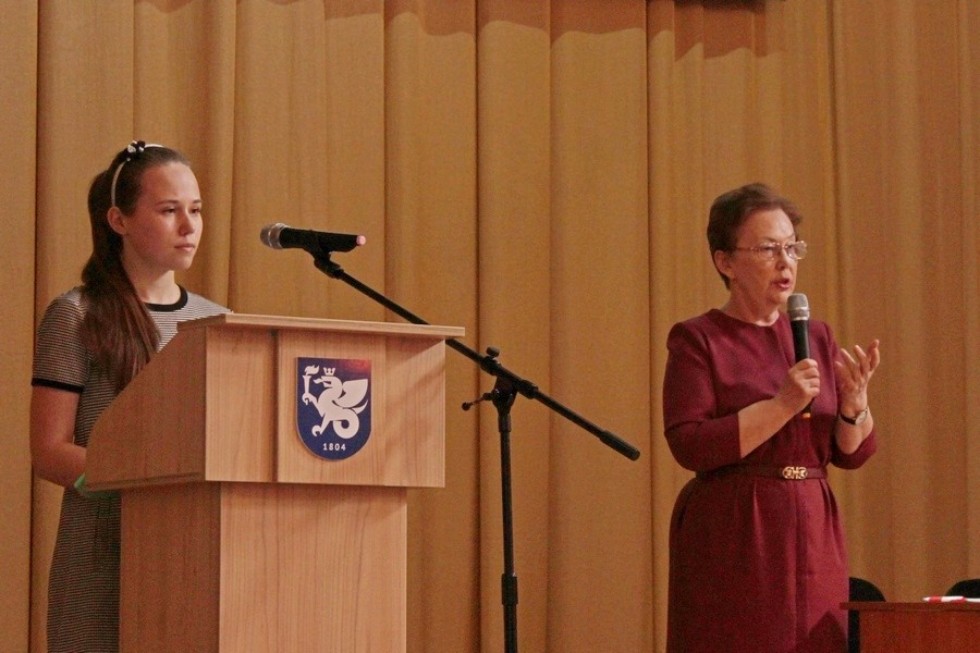 The ceremonial opening of a total scientific education conference of students was held in the assembly hall.

This year the competition of scientific works and articles took place in a new format, selection was carried out at three stages: cathedral, faculty and in the internal presentation. For the first time students were not only to conduct a research, but also to protect it publicly that has affected improvement of quality of reports.

Young scientists were welcomed by the Deputy Director for educational activity Airat Kaviev and associate Professor of the Department of pedagogy Nadezhda Savina, who supervises the research work of students.

– Today you will get acquainted with results of activity of laboratories of specific research work of the student and his research supervisor. Work which turns the student into bright identity and quite often defines his destiny, the direction and the nature of professional activity, – Nadezhda Nikolaevna has noted. – Systematic participation in competitions promotes experience and intellectual potential, and also becomes an indicator of quality of training and activity of educational institution.

Representing results of research work of students of the Yelabuga institute of KFU for academic year, Nadezhda Savina has noted significant growth in number of participants of a competition and improvement of quality of articles which influence recognition of university.

Four speakers represent the results of the researches to the audience. Tatyana Vlasova, the fourth-year student of faculty of philology and history, has visited Germany and has communicated to locals for collecting material on the subject "Use of Oral Sources in the course of Studying of Problems of the Organization of Internal Life of the Russian Germans in Germany in the 90th years of the 20th century". Railya Ilayeva, the fifth-year student of faculty of foreign languages, has made an experiment in a city gymnasium No. 4, and then has compared indicators of experimental and control groups of school students of other educational institution of Yelabuga. The obtained data are stated in work "Research approach as a condition of formation of vital strategy at seniors" with which Railya has taken the second place at the All-Russian competition "National Property of Russia".

Whether it is difficult to conduct a field research if the workmate is at the same time your university teacher? This question was revealed by Zukhra Bikmukhametova, the fourth-year student of the faculty of Philology and history. Her performance "A reflection in "field": positive and negative aspects of working together" has attracted particular interest in audience among students and teachers who were actively asking questions.

Rumiya Murtazina, the third-year student of faculty of foreign languages, has presented work "A research of adaptation of foreign students to training in higher education institution". Listeners with interest asked questions of methods of data acquisition and the opportunities of realization of offered recommendations.

- Last year I have become interested in a problem of adaptation of students to training in the Yelabuga institute of KFU, – Rumiya Murtazina has told. –This year together with the research supervisor we have decided to deepen a research and to deal with a problem of adaptation of foreign students. It is an urgent problem as all Russian higher education institutions are interested in increase in the international rating. We have interviewed 50 first-year students who have arrived from other states.

On the basis of an empirical research have been created some recommendations: one Russian-speaking student should be included in microgroups of compatriots to help them to organize work correctly; services of psychology and pedagogical support should expand zones of influence of educational actions with this category of youth. Foreign students for successful study need to use explanatory dictionaries, not to become isolated on compatriots and to communicate more with Russian-speaking acquaintances.

The main goal of a research – to introduce recommendations in practice to give help to foreign students.

To be engaged in scientific work is not easy. It was necessary to rummage a set of libraries, to read many works to create a necessary theoretical basis for a research. Language barrier became the main complexity in an empirical part. The scientific terms used in the questionnaire weren't always clear to foreign students. It was necessary to explain in other words or to resort to the help of their friends translators.

After completion of a plenary session Nadezhda Savina has shared the opinion: "Winners of a competition are the students who are well prepared in the methodological plan who plan further work in this direction. I am struck by their working capacity, commitment. Scientific work is difficult on character, volume, representing big loading. It is work on development of the identity of the student".

The meeting of sections of a total scientific education conference will last 3 days. On April 21 "intellectual leaders" of the Yelabuga institute of KFU will be announced.

Source of information: Nadezhda Hamidullina, press service of the Yelabuga institute of KFU