Victory Day was solemnly celebrated at Elabuga Institute of KFU 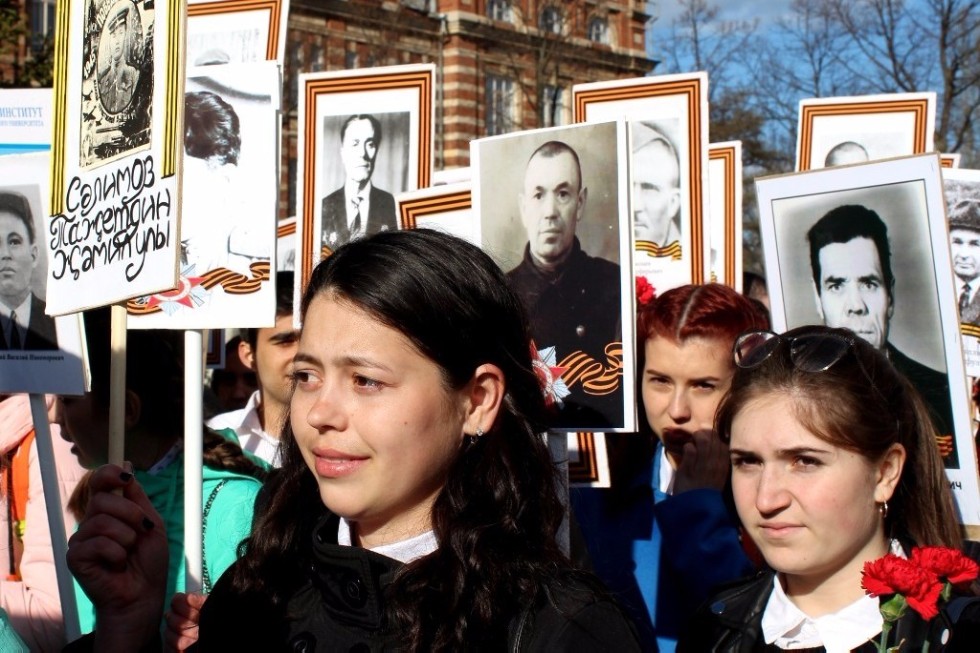 War is in the history of each family. Victory Day is the opportunity for the younger generation to touch the past, to feel the taste of the Victory of 1945th , to understand its worth.

The music of the war and post-war period sounded at noon on the university square, inviting everybody to the festive program "Victory Spring". At the retro ground the boys in war uniforms and the girls in elegant dresses went round in the waltz of that far, but so close on this day years.

The most dear guests of the institute, veterans were greeted by volunteers. Retired teachers, the "children of war", the workers of home front shared their reminiscences and learned with great interest the modern life of the institute presented by the director Elena Merzon. A friendly conversation continued in the apple orchard at the table with soldiers' porridge. Next to the smoking kettle of the field kitchen, there were tents with a medical unit and an improvised headquarters. In the other part of the garden the cinema hall has been working the whole day, where the guests could see feature and animation films of the war period. An exhibition of technical creativity was opened on the university square, students of the department of engineering and technology were sitting at the easels and depicting the picture of the holiday.

The official part of the holiday began with a solemn rally and laying flowers to the commemorative plaques of the institute teachers, the Holders of the Order of Glory Rifkat Gainullin and Vladimir Myasnikov.

One of the most moving parts of the holiday program was the premiere of the play "Killed Memory". The story of a young man who lost his beloved girl in the war moved many spectators to tears. The students-actors seemed not merely to act their parts but to live them, so bright were their emotions when they told real stories about their grandfathers and great-grandfathers and what worth had been paid for the present happy life.

The veterans could exchange impressions, congratulate each other, express their wishes to the teachers and the university authority, sing in choir their favorite songs sitting at the festive table. The presentation of the first literary almanac "University Parnassus", which included poems and prose works of several generations of those who worked and studied in the Alma Mater was prepared as a special gift for the veterans.

Students could feel the hardships of the war years in the relay "We are the grandchildren of the winners". Another traditional part of the "Victory Spring" is a parade of faculties: 7 teams marched solemnly along the square, giving honor to the Institute authority and veterans. The concert with choreographic and vocal numbers opened with the symbolic and majestic song "Victory Day" taken up by hundreds of voices.

The final chord of the holiday became the solemn procession of "The Immortal Regiment", which united about one and a half thousand students, teachers, veterans and guests of the holiday.

The march ended on Square of the Memory, where men and boys had been seen off to the front in the fatal 40s. A minute of silence and the laying of flowers to the eternal fire reminded the participants how high worth the soldiers had paid for the Victory Day.

Source of information: Nadezhda Khamidullina, Press Service of the Elabuga Institute of the KFU