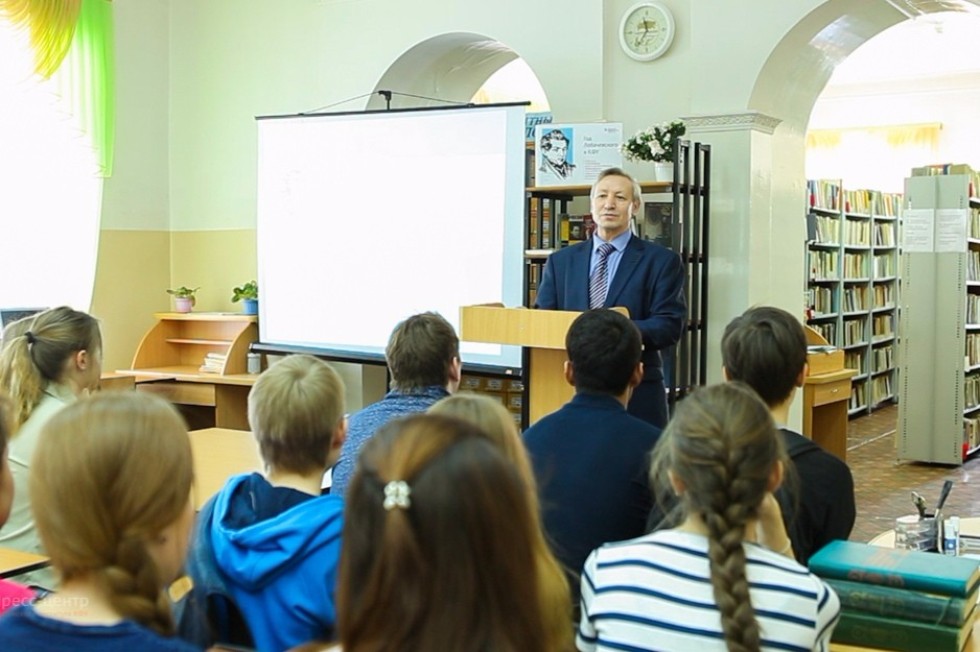 A series of lectures dedicated to the jubilee of the great scientist and outstanding rector is being read in Elabuga Institute of the KFU.

A book exhibition of works of art, newspaper and magazine publications with portraits of unrecognized genius was framed In the reading room. It is no coincidence that the meetings with students took place in the library, as Nikolai Ivanovich, with all his talents, has been included into the scope of famous librarians, personally participated in the systematization of scientific literature funds.

The dean of the faculty of mathematics and natural sciences Zagir Latipov greeted the undergraduate students. He noted that Lobachevsky made a significant contribution to mathematics, geometry and a number of other sciences, and at the same time he was an active public figure. Young people should know this side of the scientist’s life since it is the history of our university, our region, our country.

Listeners with interest got acquainted with the fate of "jumping over the centuries", learning about student mischieves of the young talent, for which he was nearly expelled from the university. While being the rector of the University, Lobachevsky' directed his energy to the development of alma mater. The construction of educational buildings, mechanical workshops, astronomical and magnetic observatories, anatomical theater, physical cabinet and chemical laboratory, library, maintenance of the mineralogical collection - all these results deserve great respect.

The lecturer focused on the "Imaginary Geometry" - at that time the scientific theory opposed to the traditional Euclidean teaching, was considered to be revolutionary one. Today, "pangeometry" has become a classical branch and finds application in the study of cosmic spaces, the construction of a general geometric picture of the "physical world", in the theory of relativity.

The co-lecturer of her supervisor became a student Guzel Gataullina, who is keen on exploring the legacy of Lobachevsky, his iconography. Guzel presented the audience some interesting facts and blew over some myths about his appearance.

"It's not easy for students to read lectures," Guzel admitted, "you feel excitement at first. But when you see the interested eyes of listeners, it becomes easier, the performance takes place in one breath. It's pleasant when after the lecture students come up and ask where they can find the full study of iconography.

Next week, the cognitive lecture will open new facets of the scientist and rector to future biologists. And the university students themselves are actively preparing their reports for the April students scientific conferences, where special sections dedicated to Lobachevsky will be held.

Source of information: Sirena Ivanova, press service of the Elabuga Institute of KFU