The conference "Heroes of the Elabuga Land: The Memory of Generations" was opened at the Elabuga Institute of the KFU 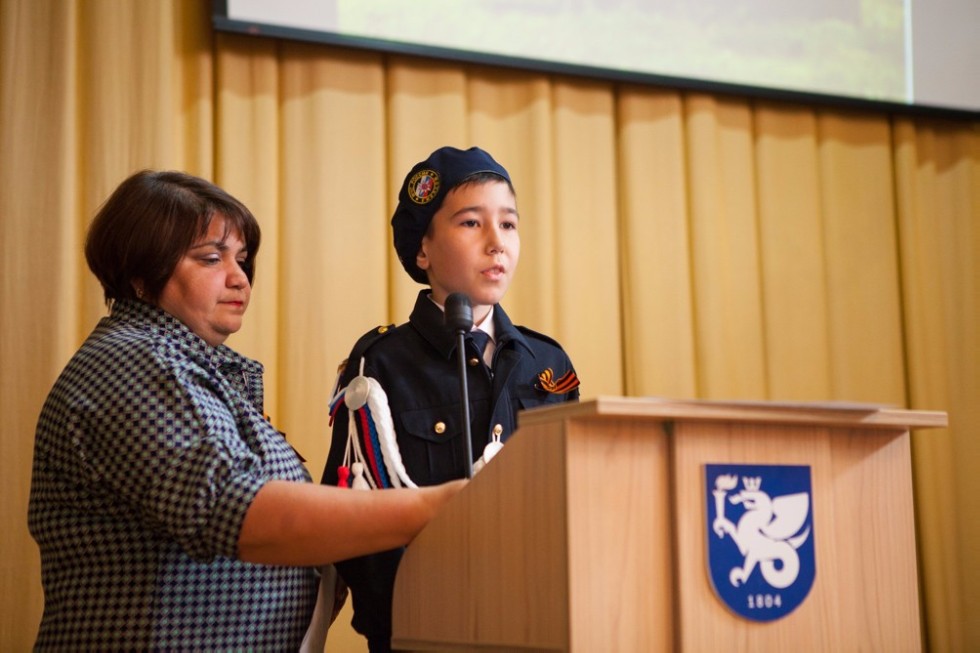 The honorary guests of the scientific-practical conference were the descendants of the Heroes of the Soviet Union.

Elabuga is a city the war didn’t come with bloody battles, artillery bombardments and the howling of the sirens that announced air alarms . But the Great Patriotic War touched upon every family that carried on to the front of fathers, husbands, sons. The exploits of the warriors-fellow-countrymen are immortalized in the stelae on the Memory Square. Today their stories come alive in the stories of the heirs, who proudly bear the glorious names of the heroes.

Major and minor researchers, representatives of famous dynasties were greeted by the director of the Institute Elena Merzon: "We are aware of the heroes of the conference from books, archives, exhibits, guide stories. But today you have brought something different: warmth, familial, from your family album. It is essentially important that there are relics and stories in your families that you solicitously store, which are plunged into the soul and cause the heart to beat more often. Thank you for deciding to share parts of your family chronicles with us.

The deputy head of Elabuga region, Zulfiya Sungatullina, announced the results of the toponymic commission that made a decision to assign the names of the Great Patriotic War heroes to three Elabuga schools. The director of Elabuga State Historical, Cultural and Art Museum-Preserve Gulzada Rudenko together with Elena Merzon awarded the winners of the republican contest "We do not want war".

Brilliant colours were added to the war portrait with the report by Inga Maslova, professor of the national and universal history department, doctor of historical Sciences. Inga Vladimirovna devoted her speech to the everyday life of scientists of the Leningrad State University who had been evacuated to Elabuga Institute.

A gift for participants of the conference from the Elabuga Institute of KFU was theatrical performance "They Killed Memory" based on the story and poems of students.

A touching and symbolic conclusion of the scientific and practical conference organized by the Elabuga Institute of KFU and Elabuga State Museum-Preserve was the laying of flowers on the Memory Square to the busts of the heroes-winners as a low bow to those we owe our life.

Source of information: Nadezhda Khamidullina, the Elabuga Institute of KFU

Ôîňîăđŕôč˙ čç ěŕňĺđčŕëŕ: The conference "Heroes of the Elabuga Land: The Memory of Generations" was opened at the Elabuga Institute of the KFU