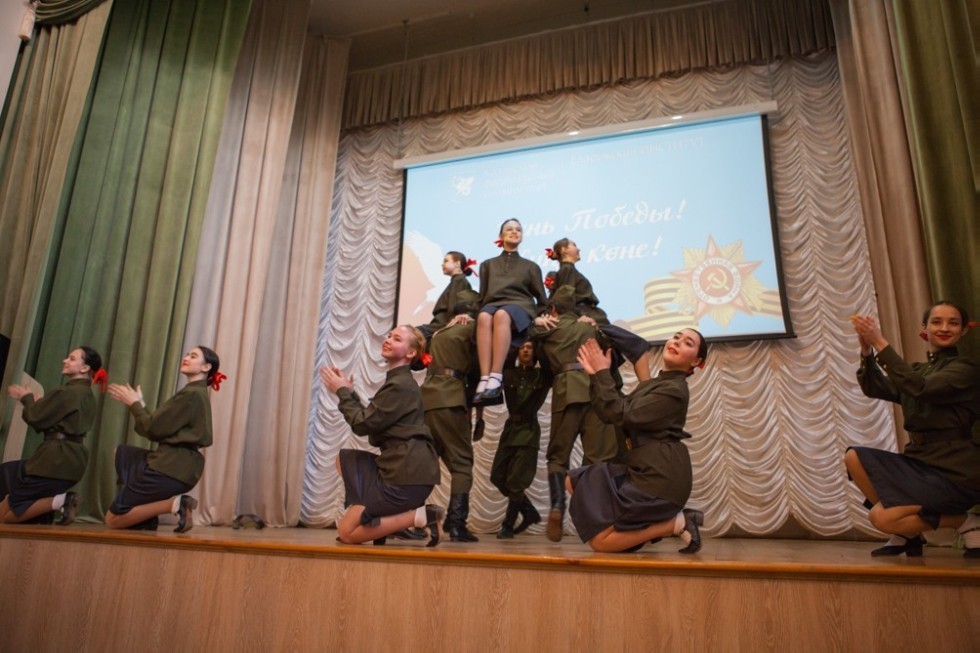 April 30, the day of hoisting of a Victory Banner over the Reichstag in Berlin, the ceremony in honor of the 76th anniversary of the Victory in the Great Patriotic War took place at the institute. On the university square volunteer students welcomed honored guests of the ceremony - veterans who have devoted a long time to work at the institute. A special issue of the newspaper "University," dedicated to May 9 was the first a gift for them.

There was a memorial rally at the institute. The chairman of the Veterans Council, Professor Anatoly Razzhivin recalled the history of the establishment of memorial plaques by iconic figures- Rifkat Khayrullovich Gainullin and Vladimir Petrovich Myasnikov, and told about the teachers who passed the horror of the war. Anatoly Ilyich paid attention to their modesty: they did not call themselves heroes, rarely shared stories about the fighting past and even more rarely wore orders. Docent Nadezhda Pospelova told about her father Vladimir Myasnikov, who fought in Stalingrad and Berlin.

In 1941 five teachers of the institute went off to war. During World War II several educational institutions were housed in the building of the University: Elabuga Pedagogical School, Elabuga State Teacher's Institute and two evacuated universities - Leningrad and Voronezh ones, as well as the employees of the branch of the USSR Academy of Sciences, headed by B.A. Ambartsumyan. After World War II 40 veterans worked here. In memory of them red carnations were laid on memorial plaques.

The concert "History of Fate" continued the festive program. The Head of Elabuga Institute Elena Merzon congratulated everyone on the upcoming holidays welcoming veterans, guests, teachers and students: «We gathered on the eve of the great date - Victory Day. It is our duty to preserve the memory of the past and pass it on from generation to generation. Our victorious heroes have conquered the world with great difficulty, and our task is to preserve it and honorably carry the banner and the name of the heroes' heirs."

Then the Chairman of the Council of Veterans of Elabuga Gennady Baganov cited sad statistics: "We have 18 veterans of the Great Patriotic War, 1 blockade, 340 labor front participants and a little more than 1,500 war children left in our city. Therefore, we ought to pay even more attention to them and never forget them."

Gulzada Rudenko, director of the Elabuga State Historical, Architectural and Art Museum-Reserve, also took the stage. "We must remember both those who were at the front and those who worked to ensure that the military had everything they needed: food, weapons, funds for the creation of tools and machines. I want to encourage our young people to be proud that they were born and live in the country of winners."

During the Minute of Silence, teachers, students and schoolchildren stood up and raised standards with portraits of their grandfathers and great-grandfathers, participants of the war - the Immortal Regiment. The festive program was opened by the song "Wreath of the Danube" performed by Karina Krivochkina, a student of the Department of Philology and History. The audience was not left indifferent by the monologue "The war does not have a woman's face" about the feat of a brave nurse who saved not only her own, but also German soldiers. Choreographic dances were also successfully interwoven into the program: "Yablochko" from the dance group "Step forward" and "Smuglyanka" from the dance group "Yalkyn". The audience was especially impressed by the literary composition "The Revived Photograph" performed by students of the "University" school and the performance "Memories" by students of Elabuga Institute, telling about the fate of war children.

After the performance, Professor Anatoly Razzhivin presented a new issue of the literary almanac "University Parnassus" - not only prose and lyrical works, but also drama, and memoirs. Anatoly Ilyich noted that any teacher, student, graduate of the university may publish in almanac and leave a cultural and historical trace.

The meeting continued in an informal atmosphere over a traditional festive feast at the Well-Fed Student cafe with solemn speeches, congratulations of the anniversaries and warm memories of the alma mater's past.

Фотография из материала: The celebration of the Victory day took place at Elabuga Institute of KFU