Students of Elabuga Institute of KFU performed at ThinkBigWeek 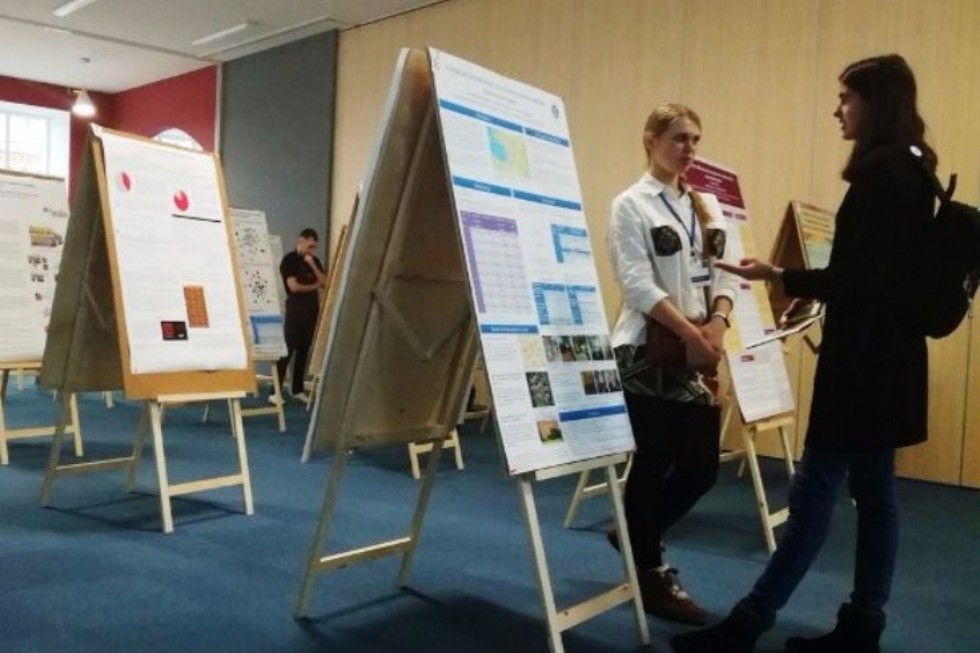 ThinkBigWeek ("Week of Large-Scale Thinking") is an opportunity to present the results of research to like-minded people and get feedback about work from leading scientists of the world. The program of the forum includes the International Scientific Student Conference, the Winter School and the cultural program. During the conference, the participants were able to attend lectures of famous scientists from different countries, visit master classes and thematic presentations, and also present their own poster presentations in sections and symposiums.

The conference within the framework of the forum was organized by the Center for Youth Studies of the Higher School of Economics under the leadership of E. L. Omelchenko.

The members of the Research and Education Center of Elabuga Institute Lia Morozova (Faculty of Foreign Languages), Zukhra Bikmukhametova and Maxim Kolchin (Faculty of Philology and History) presented their research. The trip was carried out on the initiative of Candidate of Philology, assistant professor of the Department of Philosophy and Sociology Albina Garifzyanova with the support of the Institute's management.

The working language of the forum was English, the participants had to explain the essence of scientific work, to enter into a dialogue with experts, so the guys were a bit worried, but all three could perform successfully. Returning to our university, our students shared their research topics and impressions of the conference. The syndrome of permanent online finding and the influence of gadgets on our lives is the research object of Lia Morozova.

- I began work on identifying and addressing the side effects of using gadgets and social networking structures on daily human practices in the context of the visual content contained in it, - says Lia. - The study consisted of 3 stages: conversation with test subjects, setting conditions and rules; actually the experiment itself, which lasted for a week, when two students under test did not use their profiles in social networks, but kept in touch with their environment exclusively through calls; conducting an informal interview and summarizing the experiment.

The obtained information helped to confirm that the permanent online syndrome is still an actual social phenomenon. The source of dependence on gadgets is the addiction to the visual content in social networks, which recreates the real reality and the person ceases to realize where the reality is, and where only the visual copy, the image.

The purpose of my work is to determine the level of "pro-westerness" among Russian youth in a provincial city based on the example of Elabuga, - continues Maxim Kolchin. - The study of this phenomenon was conducted in metropolis and large cities, with little impact on the province. I managed to find out that Western models of behavior and lifestyle have long been included in everyday youth practices and do not cause any reflection, since they are already considered ordinary.

Elabuga is a city with two practically equal nationalities. It left its imprint; there is nothing unusual in intercultural interaction for people. The city has the status of an educational institution thanks to the Institute of KFU, which raises the educational level of the city's youth, forming an active public position and a "positive" view of Western culture. Since the collapse of the Soviet Union, Russian society has chosen the "Western" path of development in all spheres of society. Interaction with the countries of the East and Asia was practically reduced to zero. Thus, the level of "pro-Westerness" of Russian provincial (elabuga) youth is quite high.

- In my work we are talking about the concept of "research debut" and the features of work in the "field" with a more experienced sociologist, - says ZukhraBikmukhametova. - The basis was the auto-ethnographic material obtained during the work within the framework of the project "Creative fields of interethnic interaction and youth cultural scenes of Russian cities" implemented by the Higher School of Economics. Already after the pilot stage it became clear that being in the "field" conditions, it is impossible to keep a formal relationship with the one with whom you interact in pairs.

During the work the relations could take the character of a "teacher-student", which is connected, first of all, with the experience of one researcher, and the absence of the second. It should be noted that during the "field work" these same boundaries are gradually eroding. The conditions of study, context, general practices, impressions and emotions bring together, create trusting relationships, which affects the final result of the work and the research reflection.

The head of the Center Study of Youth Cultures of Elabuga Institute AlbinaGarifzyanova noted:

- The Scientific and Educational Center ofElabuga Institute is a kind of communication platform where all interested students can find something of their own in the field of public scientific activity. As a moderator and supervisor I am looking for interesting topics, projects, together with students. Speaking in English to scientists with a capital letter, being a student, it is prestigious. There were only our students from Tatarstan. They got interesting acquaintances; saw St. Petersburg, found out about students’ lifestyle of other universities from other cities and countries. I think that this will inspire further scientific work.

Read more about the trip in the February issue of the newspaper UNIvesti.

Source of information: Mavlida Siraeva, press-service of the Elabuga institute of KFU