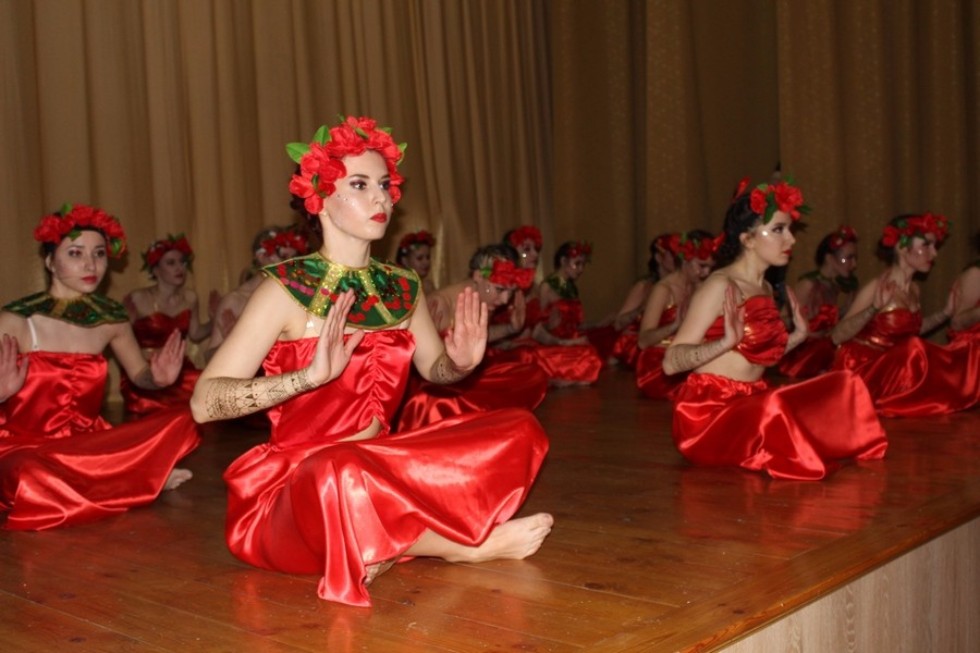 Rap, Blues, and vocals in French, dancing Mad Hatter, a talking statue, a time machine is the only not surprised, "Student spring"!

Symbolically, the annual creative festival started on the first day of spring. Three nights in a row seven faculties delighted, amazed, touched, amused spectators and exacting jury. Bright final is the result of the hard work on the s­cript and several weeks of grueling rehearsals.

Welcoming the students, the director of the Institute Elena Merzon said:

– With great love I wish you good luck this spring. Let the term will be easy and interesting. I would really like to see each of you today is ready to express emotions, to express his love to his Institute, their teachers, their friends. Because it is very important to have a reliable friend, a good helper, a wonderful Alma mater that mean so much in life. Let the studying in our University, you will remember only vivid impressions and good memories.

The director told about the results of the action "I choose again!" 86% of our students are ready to give preference to KFU, if they had to choose the university again. Elena Efimovna thanked the students for their trust and devotion to the alma mater.

The show was opened by the faculty of foreign languages, the leitmotif of which can be expressed in the words of their final song: "Sherlock. Spring. The students. Goodness and happiness all over the world. KFU is the best university ". It is necessary to recognize, the vocal and choreography were at the height, to this there was added a pinch of English humor, characteristic phlegmatic and snobbery of the main character of the sensational premiere of the year.

The faculty of mathematics and natural science contrasted the "ice-chilling soul" of the institute's legends, dexterously juggling the facets of mysticism and humor. The dean's mustache, the student's beard, and the revived statue of Glafira Staheeva, and even the philological faculty, sacrificing the grammar, in order to win the festival, went into action. The theatrical line was harmoniously intertwined theatrical dances in bright costumes. Tatar songs of the charming student duo contrasted with the main line, but found a lively response from the auditorium.

This "Student Spring" was the first for the young law faculty. Mobilizing all the forces on the stage, including the dean, who appeared in the video and danced on stage in a child's image, and an Uzbek student who sang in French. Lawyers shone with a theatrical duet, they danced, combining classics with modernity. With enthusiasm proved to the whole institute "We can!"

Starting with a dance in T-shirts with an invoice logo, the faculty of pedagogy and psychology distinguished itself with a head of mimicry, training and provoking the jury, as well as playing the guitar and the polyphony "Ivan Kupala". The Faculty of Engineering and Technology presented the fashion theater: the girls went to the stage dresses from plastic plates, wreaths from spoons and beads from forks. Impressed by the performance of the "Mummiy Troll", which after the song was radically transformed from a jester into a soul-revealing poet, having read the shrilly Esenin "I had only one fun ..."

The third day was marked by a confrontation between the tacit favorites of the festival: the Faculty of Economics and Management, which started the journey by time machine, and the Faculty of Philology and History, which launched a chic musical on the stage.

Those who did not get tickets to the auditorium could admire the spectacle, using a computer or gadget: each performance was broadcast in real time on the page of the trade union committee in social networks.

Evgeniya Merzlikina, a former employee of the university, admitted:

- I do not come to the concerts of the "Student Spring" for the first time, but this evening I was pleasantly amazed. Every year, performances are becoming brighter and more interesting. I came with my daughter, who finishes school this year and, I hope, will become a student of our institute.

- Emotions overwhelm, - the student of the law faculty Alina Timoshenko shared. - We were very worried about the performance, but we managed everything. Adrenaline, euphoria and the desire to represent your faculty adequately filled us all. We can say that this helped us to speak at the "Student Spring".

"I do not miss a single festival since 2010, but every year students show something incredible on the stage, which has not happened yet," said the stage director and member of the jury Aidar Nurmiyev. - For example, it was interesting to dance in the dominoes of the faculty of mathematics and natural sciences - it felt original, unusual aesthetics, mystical, fantastic atmosphere, in which the audience was immersed. These are the most valuable numbers.

A feature of the "Student Spring" this year is performances in the new faculty. I think this will give a new alignment of forces, a new round in the creative movement. Although the main purpose of the festival is to give students the opportunity to express themselves on stage, to cause a sense of pride in their fans and to rally the faculty into a single team. In creative work the guys embody their fantasies, invest a lot of work, and try to choose non-standard, sometimes complicated solutions to surprise the audience.

Jury members are professionals in their field. They sometimes find it difficult to get used to the idea that they judge amateurs, amateur performance, overestimating the bar, - said Aidar Maratovich. - But there is a plus in this - young people have something to strive for.

March 17 will be a gala concert of the festival "Student Spring". The students will present the best performances on the big stage in the city palace of culture.

Source of information: Nadezhda Khamidullina, the press service of Elabuga Institute of KFU