Residents of Yelabuga were presented the 'Night of Science' 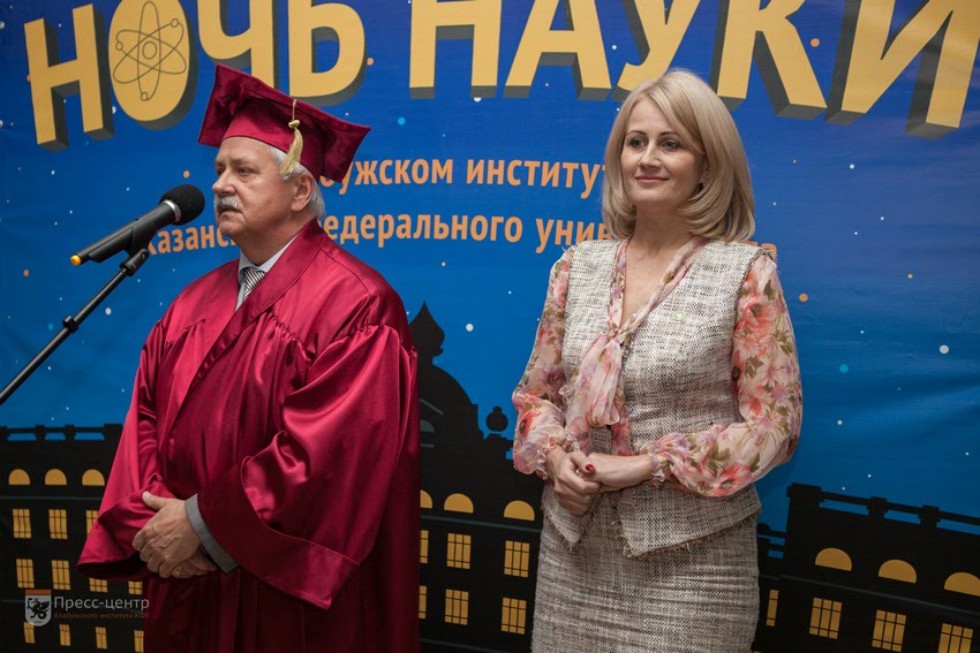 The scientific-educational action was held in Yelabuga Institute KFU in November 25.

All curious residents of Yelabuga could become the members of this unusual action. On the site of the institute the guests were being acquainted with interesting experiences, scientific experiments and fascinating lectures for 4 hours.

The scale of the action - 24 interactive scenes, more than a hundred of scientists and researchers of the Yelabuga Institute of KFU, about 700 active guests.

Every visitor could stand in a row with the scientists this day: look at the experiments in physics, and he could participate in them, test his knowledge in mathematics, study the structure of single-celled organisms with a microscope, learn special computer programs and could self-programme a robot and much more, all that once seemed difficult and incomprehensible.

Right here it was spoken about the complex things so clear and interesting. The public was presented the interactive sites "Peace and robots", "Chinese hieroglyphs ", "Journey into the world of pedagogy», which enjoyed popularity among the guests. However, no less interesting places to visit were master classes from designers in quilling, paper plastics, manufacturing of flowers from fabric and painting fir-tree toys, entertaining lessons in physics and mathematics, the sites for diagnosing of psychological properties of personality, mental conditions, interpersonal relations. And in the crime lab the participants were shown how to remove properly fingerprints and determine the propensity to commit crimes on handwriting. Guests could get advice on their rights in a legal clinic, visit film seminar and literary site "The World of Poetry", and see a negative impact on the body of certain chemical compounds used in the food industry, etc.

It should be noted that such actions, which are conducted in the framework of the project «PRO NAUKA in KFU" from July this year, quickly gained popularity among a wide range of the population. The project includes a series of scientific and educational intensives, "Science in the Summer Night", "Night resonance", "Operation Night" and "Night of the future."

As part of the event a citywide parent meeting was held in Yelabuga, during which the university administration and the guests had a conversation on the topic "Choosing the exam - an important task of a school leaver." Applicants and their parents have been told about the peculiarities of the admission-2017, and they were introduced them to the priorities of the university, its projects and achievements.

"We were delighted, - says Venera Valeeva, the mother of the10-th form pupil Rosalia –we liked a master class in Chinese hieroglyphs very much, as we are planning a trip to China, we found it very helpful. We visited the Museum of Archaeology, where we passed an interesting quest, and even received a prize. "

The event of a similar format was held in Yelabuga for the first time, but, as it was noted by the organizers, the Yelabuga Institute of KFU will continue organizing such events.