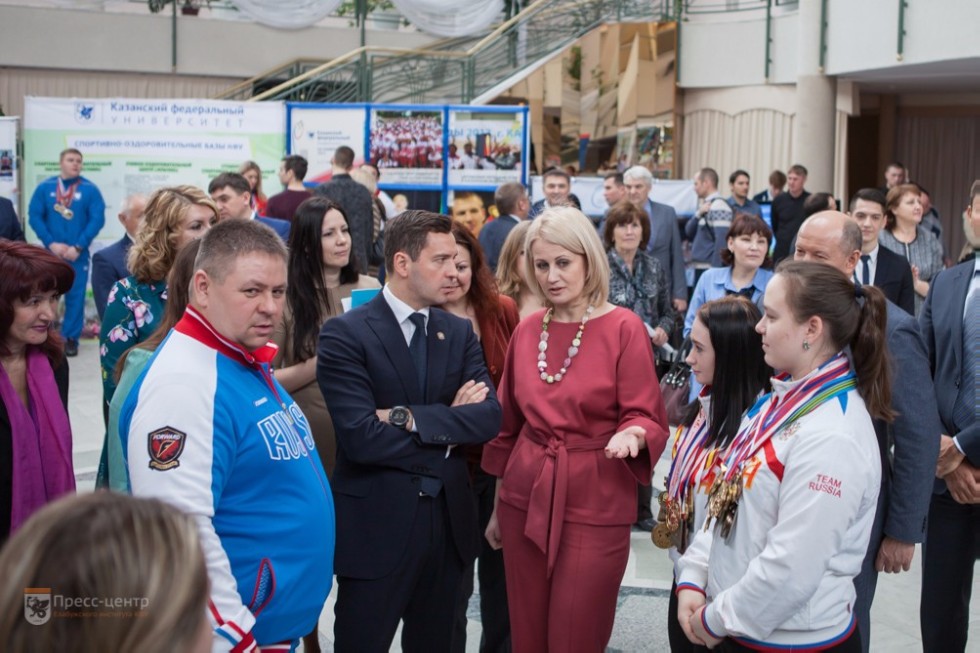 Deputies, heads of ministries, departments, universities and colleges of the RT were the participants of the meeting of the collegium of the Ministry of Youth and Sports of the republic.

For the first time the issue of the development of student sports in Tatarstan was seriously declared from high tribune, when the republic proposed the Universiade 2013 in Kazan. A significant event left a rich legacy: large-scale sports facilities, the Universiade Village, which were transferred for schoolchildren and youth. Today the republic occupies a leading position in this sphere, but it is too early to stop. Topical issues were brought up again in Yelabuga.

Before the meeting, the achievements of the KFU were presented by the vice-chancellor for social and educational work Arif Mezhvedelov, the director of the Elabuga Institute Elena Merzon and the director of the Department for Youth Policy of the University Yulia Vinogradova. "We set the task of attracting the maximum number of students to regular sports, participating in sports events and projects, creating a healthy lifestyle, and this, in turn, is part of the process of forming an active and healthy nation of our country," noted Yulia Vladimirovna.

- To solve these problems, the KFU has created program based on close interaction between structural divisions: that is the Department for Youth Policy, Social Affairs and the Development of Physical Education and Sports, the University Department of Physical Education and Sports, institutes, faculties, the Universiade Village, sports recreation centers, health camps."

The Kazan federal university was represented by the students from Kazan, Naberezhnye Chelny and Elabuga. Deputies, heads of ministries spoke with great interest to the champions of the Elabuga Institute of KFU, members of the Russian and Tatarstan national teams - Alina Salimullina, Renat Khayrullin, Ekaterina Zhiltsova, Alina Davletshina. There were also master classes on powerlifting and passing the GTO standards on weight lifting, which carried away both students and officials. The oldest participant, who received the certificate on that day, turned 73 years old.

Elena Merzon spoke about the inventions of her colleagues: the know-how of "athletic shoes" for people with disabilities which allow them to participate fully in sports competitions, as well as a registrar of the requirements of the GTO for tightening on the crossbar.

The project of creating the scientific and methodological center "A Teacher of the XXI Century is a Healthy Teacher" was presented, which can be implemented by the Elabuga Institute of the KFU together with the Ministry of Youth, Sports and Tourism of the Republic of Tatarstan. If the student receives exemption from intensive training for health reasons, does not use his full potential, then the schools will get teachers constantly taking the "sick leaves".

The aim of the project is to diagnose and develop the potential of students’ activity. The task of the center is to diagnose, analyze, work out scientific and methodological recommendations and create individual development programs for each student - the future teacher.

The Minister of Youth and Sports Affairs of the Republic of Tatarstan Vladimir Leonov told about the goals of the "big meeting": "Elabuga is always in the forefront, it's not for nothing that we hold a board here. Not every city can boast of such quantity and quality of object, which are open for all. It's very cool that these facilities are in demand, including the branch of the KFU. After all, it prepares teachers who, after graduating from high school, get a profession and remain in the field of sports.

We’ve invited all persons concerned: heads of universities, educational institutions, colleagues from ministries and departments. A large competent board was assembled. The most important issue is the drawing of the right conclusions. The meeting is being held to settle the problems.

The project, which was presented by the Elabuga Institute of KFU (creation of a scientific and methodological center), is a rather burning issue. This issue is being taken up to some extent. If we talk about Elabuga as a center of education in the region, such a ground can be considered. We agreed with the leadership of the university that we will exchange information, discuss how to solve this issue. It is important for whom this service will beadressed, what the results will be reached. In general, the project is interesting. "

Speakers Marat Bariev, State Duma deputy of the Russian Federation, Emir Harisov, chairman of the youth sports and sports society "Burevestnik", heads of higher educational institutions of Tatarstan shared their vision of the program of sports development in the republic.

Elena Merzon noted in her report that in Elabuga Institute of KFU more than 1,700 students are engaged in physical training in the frame of the curriculum. "We see our main task in educating future teachers, for whom a healthy lifestyle should become the norm. We have created all the optimal conditions for training and practicing physical culture and sports: 12 sections with a good material and technical resources, equipped with sports facilities, an educational and sports complex with a shooting gallery, a sports hall and grounds, a ski base. "

Elena Efimovna presented to the presidium and a wide audience the sports camp "Burevestnik". After the reconstruction, supported by the rector of the KFU Ilshat Gafurov, it became the best in the republic according to the results of the 2016 rating compiled by the RC "Leto". Today the camp can accept 160 persons at a time. There are comfortable buildings, a licensed medical office, a universal sports ground, a well-equipped beach, the necessary rescue equipment and, of course, a lake with a cleaned bottom. Leaders are the best students who receive special training

Since capital construction on the territory of national parks is prohibited, Elena Merzon proposed to consider the possibility of transferring to the health camps "mobile homes", some of that kind contain showers, bathrooms, production units. In addition, to realize the university projects on educational programs and recreation of schoolchildren, it is necessary to have playgrounds, simulators, sports courts.

At the end of the speech Elena Efimovna emphasized that not only achievements at the sports Olympics, participation of children in competitions are important. The task is more responsible:to organize the sports-mass work with students. The head of the university suggested to accept the "Program of the development of student sport in the Republic of Tatarstan".

Summarizing the results of the panel, Vladimir Leonov noted the productivity of the meeting and promised that all the problems voiced there will be considered in the near future. On the ground of the sports camp "Burevestnik" it is planned to hold a meeting devoted to the organization of a summer health-improving company, so that many of those present in the hall had the opportunity to get acquainted with the forefront ground.

Source of information: Nadezhda Khamidullina, Press Service of the Elabuga Institute of KFU

Фотография из материала: Program of the development of student sports in Tatarstan was discussed in Elabuga