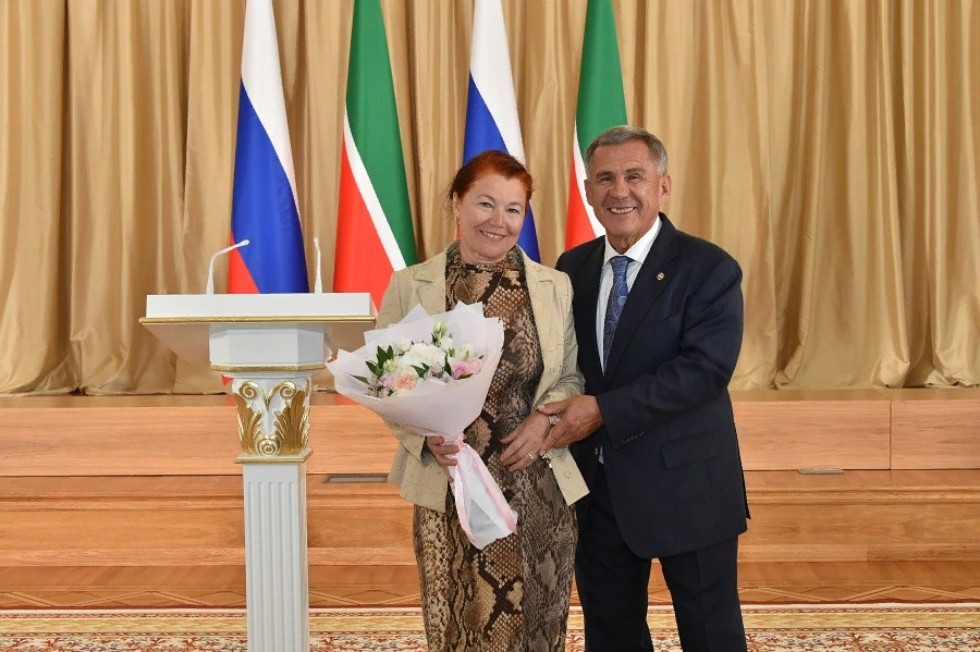 The solemn ceremony of presenting honorary awards to distinguished Tatarstan citizens took place in the Kazan Kremlin. The best representatives of education, culture, healthcare, agriculture and not only were invited. In total, 58 people were awarded state awards. Among them, professor of the Elabuga Institute of Kazan Federal University, Daniya Abuzarovna Salimova, who was awarded the title "Honored Worker of Science of the Republic of Tatarstan" by decree of the President of the Republic for many years of fruitful research work. Note that she became the first person from Elabuga to receive such an honorary award.

Dania Abuzarovna - graduate of Kazan State University, Doctor of Philology, professor of the Department of Russian Language and Literature of the Elabuga Institute of KFU. She devoted more than 35 years to work in the field of education and science. The works of Denmark Salimova are known far beyond the borders of Russia: 8 monographs, 12 study guides have been published, more than 250 scientific articles have been published. Under the supervision of a professor, 16 master's theses have been defended.

Denmark Salimova took part in 26 international conferences and seminars on the problems of linguistics in Russia, Germany, Hungary, Austria. The professor is a scientific consultant of the international laboratory with distributed participation "Innovative technologies in the field of multicultural education." Under her leadership, for three years, from 2015 to 2017, the project “The Language and Culture of Russian Germans in Migration: Problems of Self-Presentation and Self-Identification” was implemented under a grant from the Russian Humanitarian Science Foundation.

Anchor The team of teachers and students of the Elabuga Institute of KFU sincerely and wholeheartedly congratulates Dania Abuzarovna Salimova with a high award and wishes further success, the implementation of all plans, good health and prosperity.

Фотография из материала: Professor of Elabuga Institute of KFU - Honored Scientist of the Republic of Tatarstan