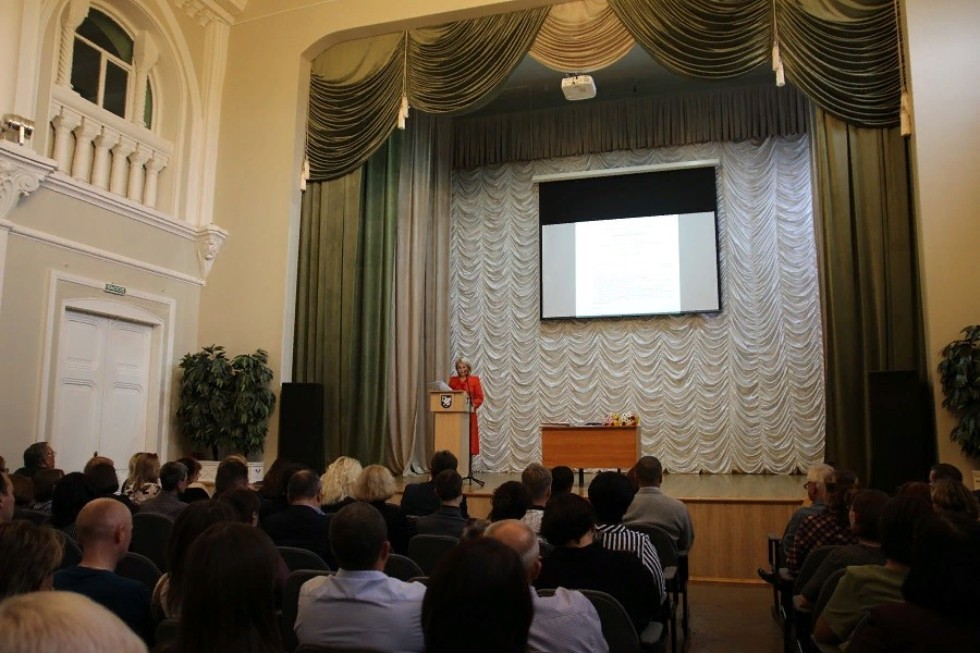 On the eve of September, teachers and employees of the institute gathered to discuss plans and tasks for the new academic year, as well as summarize the work of the university. The meeting of the collective was opened by the director of the Yelabuga Institute of KFU Elena Merzon. She congratulated all the teachers and staff on the upcoming start of the new school year, wished everyone success and good health. At the same time, Elena Efimovna noted that the priority issue at the university today is the enrollment of applicants for the first year. It is worth noting that the acceptance of applications by the Elabuga Institute continues to this day. A final enrollment order for freshman students will be released on September 14, 2019. Today, 927 freshmen have already been enrolled in the university, among them 140 foreign citizens. 551 students will study on a budgetary basis. The geography of applicants this year has expanded somewhat. Among the first-year students are children from the Novosibirsk, Samara, Orenburg regions, the republics of Komi and Tuva, as well as representatives of the Krasnodar Territory.

In the course of her report, Elena Merzon also summarized the results of grant competitions, in which the Elabuga Institute of KFU took part with great success. This summer, four university projects have won grants from Rosmolodezh. The institute will be allocated one million rubles. The winning projects are aimed at creating an accessible environment, patriotic education and holding various festivals. In addition, in the framework of the National Education Project of the federal project “Every Child’s Success”, the university implemented an environmental and technological shift project for foreign students “Ecotech”. In its framework, for the children, teachers of the institute organized classes to improve the ecological culture. The project of the Yelabuga Institute of KFU - “TsifroLeto”, implemented with the support of the Ministry of Education of the Russian Federation, deserves special attention. 300 schoolchildren were able to improve their digital literacy as part of the federal project "Personnel for the Digital Economy.”

Big tasks await the alma mater in the next few years. Within the framework of the federal project “Every child’s success” of the national project “Education”, the “House of Scientific Collaboration” will begin its work at the Yelabuga Institute of KFU in 2020. Students of the center of further education at the university will be 400 children aged 5 to 18 years. Also, in the next two years, as part of the federal project “Teacher of the Future” of the national project, one of six centers for continuing professional development of teachers will open at the Yelabuga Institute. Its opening is planned in 2021. The continuing education center in Elabuga will be the third in a row in the republic.

During the meeting, much attention was paid to safety measures, the organization of educational and educational processes. Elena Efimovna also thanked her colleagues for their active participation in the X International Festival of School Teachers, which took place at the Yelabuga Institute of KFU for three days.

A rewarding moment for the employees of the university was the rewarding of its employees. The diploma of the Ministry of Education and Science of the Republic of Tatarstan for many years of conscientious work was noted by the senior lecturer of the Department of Theory and Methods of Physical Culture and Life Safety Lutsiya Shaimardanova. Also, from the director of the institute, Elena Merzon, professor Inga Maslova and senior lecturer Yuri Maly received letters of thanks.

The meeting of the labor collective passed into an expanded meeting of the Academic Council of the institute, in the framework of which the election of teachers for vacant posts was held.