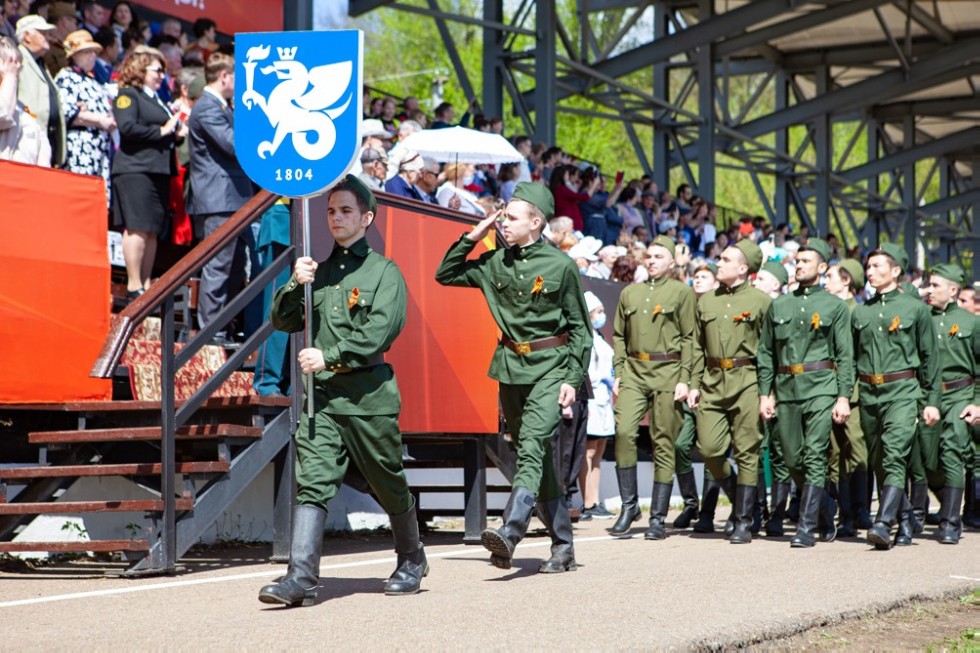 The rector of the Kazan Federal University Ilshat Gafurov admonished the students.

On the day of the Great Victory in Elabuga, they honored the heroes of the holiday - veterans and paid tribute to the memory of those who died in the battles. The management, teachers and students of the Elabuga Institute, students of the "University" school took part in the solemn events.

Rector of KFU Ilshat Gafurov visited the exhibition of military equipment on the university square, where members of the student design bureau "Evrika" presented a tank based on a car and a themed convertible "Volga" "We remember! We are proud!".

“As part of the Victory Day celebrations, we present a Volga car for the parade. If you look closely at the side doors, you will see the names of our veterans who are no longer alive, who gave their lives for our peace and quiet. Every year there are fewer and fewer participants in the war, I would like to wish them health and longevity,” – said Linar Akhmetov, head of the engineering and technological department.

As part of a private visit, Ilshat Rafkatovich, together with his grandson, laid flowers at the city memorial of the Eternal Flame, assessed the university grounds at the stadium “Molodezhny”, where the main program on May 9 was launched.

The official part of the celebration began with a procession and rally, in which a delegation from the university with the director of the Elabuga Institute Elena Merzon took part.

The festive program at the main stage was opened by the head of the Elabuga region Rustem Nuriyev: “Dear veterans, home front workers, dear Elabuga residents, I congratulate you on Victory Day! This is a sacred date in our history, which is dear to all citizens of our country. The heroism, courage and courage shown inspire people to new victories and achievements. Happy Holidays! " After that, the audience was united by a Minute of silence.

At the stadium, students of the institute presented a wartime installation "Halt" with soldiers during their leisure hours. Everyone could take a picture with the guys and taste the soldier's porridge.

At the end of the event, a solemn rewarding of the best groups took place in the framework of the III Municipal Festival of Choral Music "Spring of Victory", dedicated to the 76th anniversary of Victory in the Great Patriotic War. The choir of the "University" school "Peresvet" became a finalist of the competition and was awarded a III-degree diploma.

“I really like the atmosphere and atmosphere of the holiday. It is important to celebrate Victory Day in order not to forget the history of our country, so that children from an early age know that our country has won. I would like no one to forget about their roots and continue to be proud of their homeland,” – said Lilia Galimova, a senior pupil of the “University” school.

Recall that about 14 thousand soldiers left the Elabuga region for the front, about 6 thousand front-line soldiers returned home from the fields of the Great Patriotic War. In 1941, 15 teachers worked at the Elabuga Teachers' Institute, at the beginning of the war 5 teachers went to the front. During the war years, the building of the university housed the Elabuga Pedagogical School, the Elabuga State Teachers' Institute (ESTI) and two evacuated universities - Leningrad and Voronezh, scientific activities were carried out by employees of the USSR Academy of Sciences branch. In total, during the war years, 22 professors and 25 associate professors worked at the institute along with the evacuees.