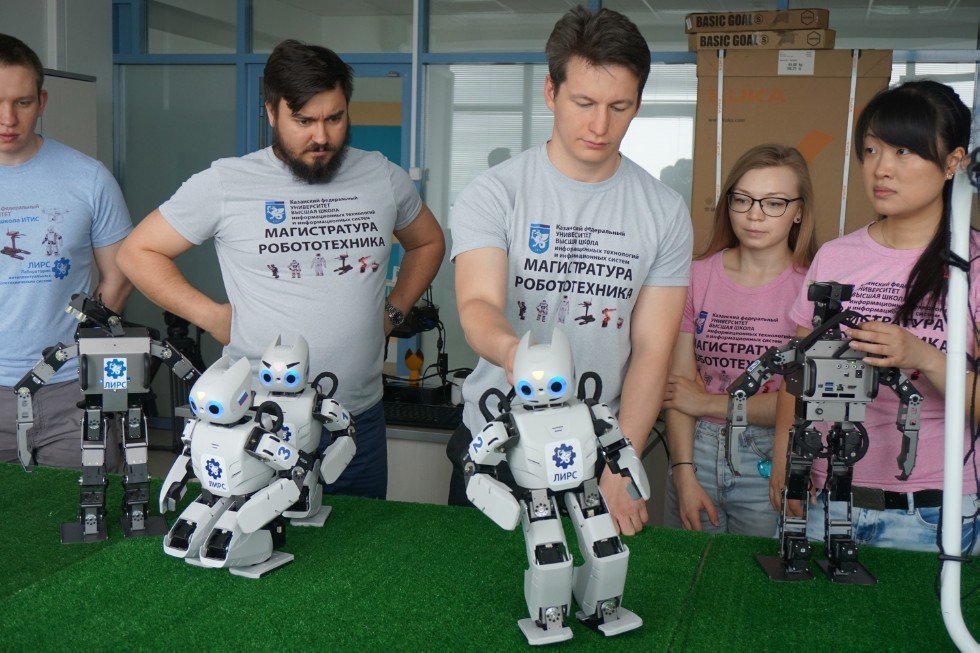 On June 15, Kazan Federal University will host a robofootball training match. Robots of the Higher Institute of Information Technology and Information Systems (ITIS) and the Institute of Engineering will participate in the match. Three robots from each team will take part in the training competitions: two field players and a goalkeeper. Anthropomorphic robots ROBOTIS-OP3 will represent the Higher Institute of ITIS. The peculiarity of this model is that it has open hardware and software, which allows you to develop your own algorithms and integrate them into the robot's control system.

Today, students of the Laboratory of intelligent robotic systems (LIRS) are developing algorithms for gate search and team interaction, and their subsequent integration into robots ROBOTIS-OP3.

During the training robots will search for a ball of a particular color on the football field. And when it gets into the field of view of the "player", the robot will approach the ball and try to score it into the opponent's goal.

The match will consist of two equal periods of 10 minutes in length. Then, in case of an equal score a penalty shootout will be carried out. Such regulations will help to test the level of training of KFU teams for official competitions. However, the match represents a friendly training session; at the end of the formal part of the game both teams will continue the game, as far as the batteries of robot players will allow them.

Until mid-June the LIRS stuff conducts closed training sessions to work out the software created by the Laboratory employees.

Robofootball in Russia has been actively developing over the past few years. We asked Evgeni Magid, a Head of the LIRS, why robofootball is important and how it will develop in the upcoming years:

"The officially stated goal of the RoboCup robot football competition is to develop new algorithms and technologies that will ensure the victory of autonomous humanoid robot players over the human World Cup winning team by the middle of the 21st century. Every year, the number of participating teams and universities is growing all over the world as interest in robotics increases among young people, financial support for participating teams from sponsors increases as well and the minimum necessary equipment becomes cheaper. For universities, participation in competitions is rather a matter of status, since it actually takes a lot of working time and requires constant funding both in the preparation process and for the trip to the competition itself. Therefore, the issue of the team's participation directly depends on the financial support from the university and sponsors. For LIRS, preparation for participation in RoboCup is primarily caused by the desire to give students of the master's program in intelligent robotics and a bachelor's degree in software engineering of the Higher Institute of ITIS KFU the opportunity to practice the knowledge gained at the robotics special courses".