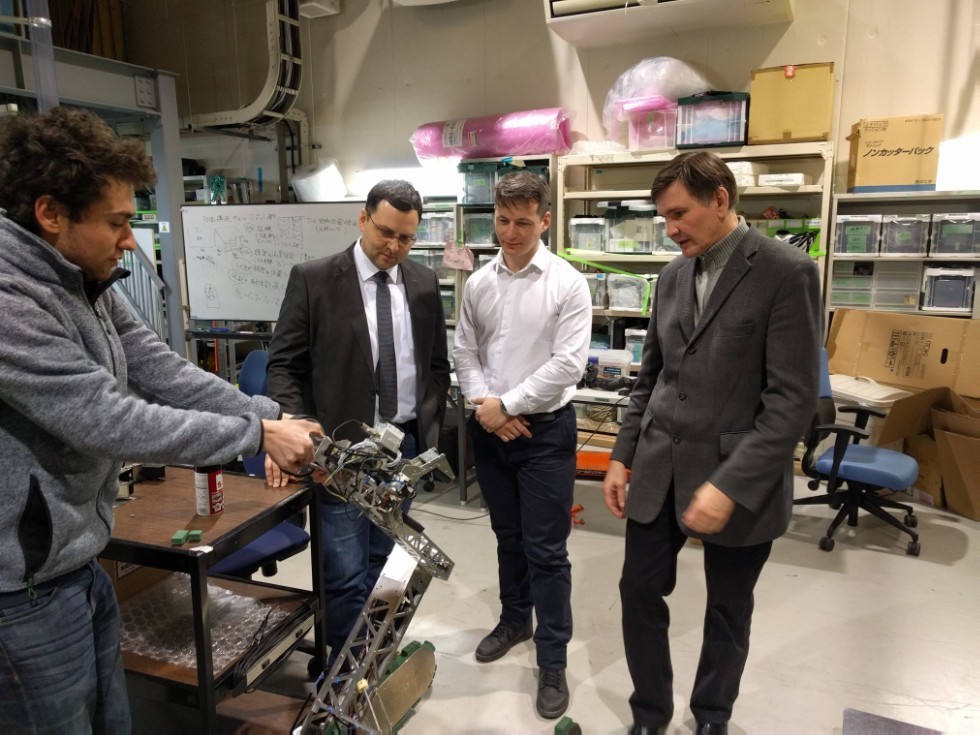 On February 8 - 9, 2018, employees of the Laboratory of Intelligent Robotic Systems (LIRS) of the Higher Institute of Information Technology and Intelligent Systems (ITIS) of Kazan Federal University (KFU) visited Kyoto University. Professor of the Department of Intelligent Robotics Evgeni Magid gave a lecture to the students of the Institute of Engineering at Kyoto University on the development of search and rescue robotics at LIRS, including demonstrating the results of modeling robots and algorithms using the Gazebo simulator, prototyping algorithms in the Matlab environment and experimental work with the Servosila robot "Engineer". He also spoke about the history of KFU, research achievements of LIRS and the opening of an international master's program in the field of "Intelligent Robotics" at the Higher Institute of ITIS KFU. LIRS staff visited the famous laboratory of Professor Fumitoshi Matsuno, which is the only robotics laboratory at Kyoto University. Professor Matsuno spoke about projects in the field of robotics, and his students showed the LIRS employees the practical results of their research, more than 30 robots in the main laboratories and five test sites located in four different premises: a testing ground for snake robots, a search and rescue site RSE (such the same RSE test site is used in LIRS for testing the mobility of robots and route planning algorithms in a complex three-dimensional environment), a large pool for testing underwater robots, a test site under construction for testing the swarm interaction of heterogeneous groups of unmanned aerial vehicles (UAVs), equipped with the most modern motion capture system, and a testing ground for mobile robots aimed at interacting with people with disabilities, also equipped with a motion capture system (of a different type). The meeting was held in a friendly and hospitable atmosphere, during which possible areas of cooperation between KFU and Kyoto University in the field of education and research were discussed. During the discussion, Professor Magid was invited to attend the The 62nd Annual Conference of the Institute of Systems, Control and Information Engineers, which will be held May 16-18 in Kyoto, Japan, and to join the Conference Steering Committee.