An online meeting between the Laboratory of intelligent robotic systems and Indian partners within the framework of the international Russian Foundation for Basic Research project
Main page \ Academic Units \ Physics, Mathematics and IT \ Institute of Information Technology and Intelligent Systems \ Research \ Laboratory of Intelligent Robotic Systems \ News 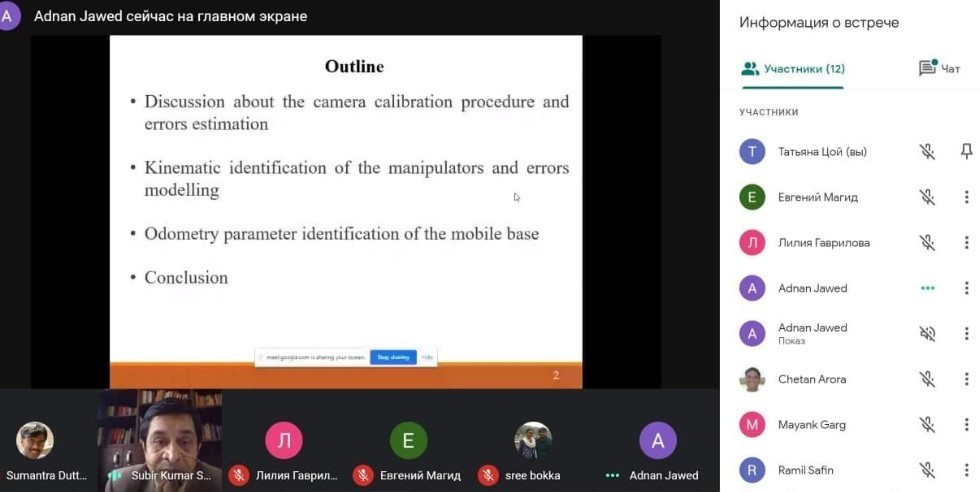 On January 12, 2020 the Laboratory of intelligent robotic systems (LIRS) of the Institute of Information Technology and Intelligent Systems (KFU) held an online meeting with the Indian team with the aim of discussing the results of a joint scientific project. In 2018, under the leadership of Professor Evgeni Magid LIRS received the support of the Russian Foundation for Basic Research (RFBR) for the implementation of a joint international project with the Indian Institute of Technology Delhi (IITD) on the following topic:

"Autonomous calibration of onboard cameras of a robotic system using fiducial markers located on the robot body".

The supported project is aimed at developing a system for evaluating the selection of the optimal coordinate tag for calibration of mobile robotic transport systems (RTS) cameras and calculating the optimal location of the tag on the RTS surface for the further possibility of performing autonomous calibration.

During the meeting, Professor Evgeni Magid and laboratory employee Ramil Safin made presentations on the side of the Russian team. They spoke in detail about the results of the project presented by the Russian side in a report sent to the RFBR in October 2020. On the part of the Indian team, a group of Professor Sibur Kumar Saha made a report.

The teams discussed further cooperation within the Indian Center for Technological Innovation on Collaborative Robotics, established in 2020 with the participation of LIRS team, and the possibility of submitting new joint Indian-Russian applications for grants in 2021. The international project team continues to jointly prepare several scientific publications for highly rated journals based on the results of the project now.