Evgeni Magid attended the International Workshop of ICAROB-2019 in Taiwan 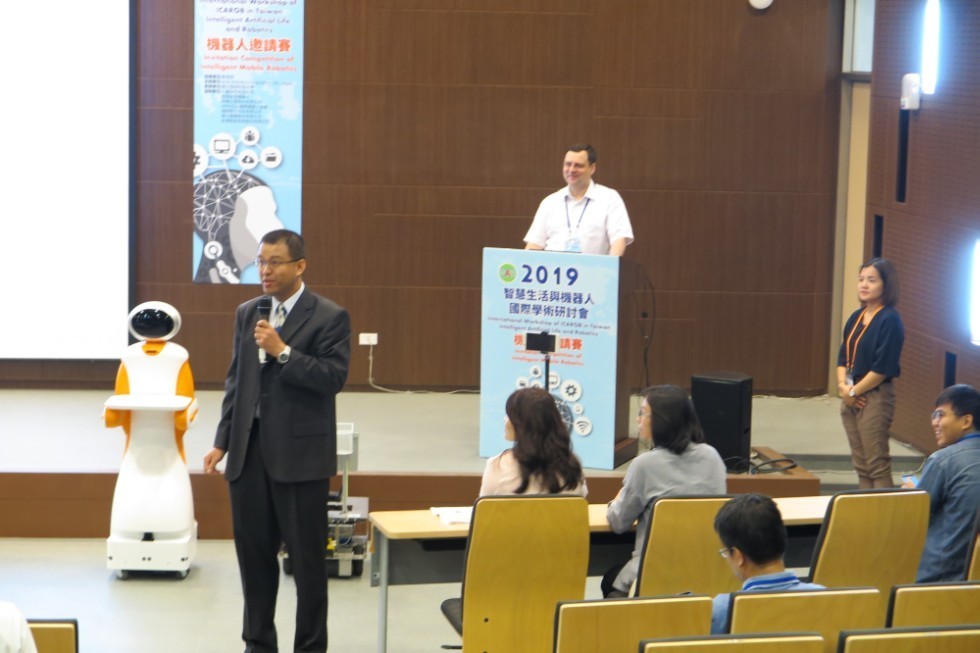 From 27th to 30th June 2019 within the International Conference on Artificial Life and Robotics, ICAROB in National Yunlin University of Science & Technology (Taiwan) was held the International Workshop of ICAROB-2019 .Proceedings of ICAROB 2019 will be indexed in CPCI-Web of Science. The aim of the event is to provide new developments of modern technologies related to the topics of the journal “Journal of Robotics, Networking and Artificial Life” (Atlantis Press publisher, indexed by ESCI), also concerning computer modeling, hardware development and creation of new technologies network for researchers. Extended versions of chosen papers will be included in special journal issue. In addition, the aim of the workshop is to widen the information about developments in the field of robotics and technologies of artificial life, artificial intelligence, virtual reality and computer sciences that create a basis for the new perspective researches and practical implementation in various fields.
Professor of Intelligent Robotics Department of a Higher Institute of Information Technologies and Intelligent Systems Evgeni Magid spoke as an external speaker. The topic of the two-hour speech, prepared within the workshop was:
“Disaster Risk and Reduction Management with Search and Rescue Robotics Approach”. Authors: Evgeni Magid, Tatyana Tsoy, Fumitoshi Matsuno, Jackrit Suthakorn, Mikhail Svinin.
During the workshop was signed the Memorandum of Understanding between National Yunlin University of Science & Technology and set of companies, involved in developments in the field of robotics, including such companies as TECO, NEXCOM International Co. Ltd, SA YANG YE Industrial Co. Ltd, ZEP Co. Ltd , Asia Pacific Robot Alliance and others. As a member of international organizing Committee of ICAROB, Evgeni Magid took part in the ceremony as a guest of honour. Also within the event, with the support of ICAROB and Softbank took place competitions on robotics between students and pupils. Sets of LEGO EV3 were used in “Mobile robotics” nomination. NAO robots V6 were presented in “Dancing” and “Running” nominations. Evgeni Magid was a judge in “Running” nomination and took part in awarding ceremony.
On the last day of workshop Evgeni Magid visited the laboratories of professor Peter Wu and professor Kuo Lan Su, where he learned about educational process, state and industrial projects of laboratories and also with the equipment. Evgeni Magid and Kuo Lan Su actively collaborate from 2018; within several initiative projects they prepared 5 joint publications in editions indexed in CPCI-Web of Science and Scopus and 2 grant applications.
Evgeni Magid shared with us his workshop experience and told about his visit to the National Yunlin University of Science & Technology: “Active collaboration between KFU and various Asian universities in the field of robotics began in 2016, when I was invited to become a member of international organizing Committee of ICAROB. Little by little, we found out about several initiative projects with professors from India, China, Thailand, Taiwan and Japan. In according with results of this set of initiations, there were prepared some collaborative international applications in different fonds; two of them were already supported. I mean RFBR project called “Autonomous calibration of board cameras of robotic system using coordinate labels” with our Indian friends and another project eAsia called “Information system of controlling liquidations of natural disaster consequences in flooding and landslide areas with the use of distributed heterogeneous groups of robots” with our friends from Taiwan and Japan. Also I'd like to admit that our eAsia project became one of two projects in Asia, which were supported, and the only supported one with participation of Russian researches team. Now we have strengthening of our relations with Taiwan colleagues, who plan to visit Kazan at least 2 times this year: to participate in World Skills-2019 in August and in International Conference “Developments in eSystems Engineering 2019” that will be held in October in KFU. I consider strengthening of KFU relations with Asian countries in the field of robotics extremely perspective because of its rapid and active development. There are not only governments and top universities of Asia that make huge investments in robotics, but also lots of private companies and foundations. While talking to my Taiwanese colleagues, I complained that Russian business, unfortunately, do not invest enough in knowledge-intensive projects with universities, but basically it tries to agree on various kinds of non-paid pilot projects, using students and industrial internships. It turned out that there are no similar situations in Taiwan, this stage ended 10 years ago, when companies asked universities to do something for them for free, however it was unsuccessfully. Finally, when companies realized that doing ephemeral knowledge-intensive projects on their own is too expensive, and getting a high quality pilot product free and fast is simply impossible, they changed this toxic policy to prevent its backwardness, comparing with foreign companies. Also, universities have imposed a reduced tariff on the overhead costs of organization for the projects, which helped to reduce the prime cost of development. I hope Russian business will gradually come to understanding the importance of equal and mutually beneficial cooperation with universities, which will lead to the benefit to business and universities.”