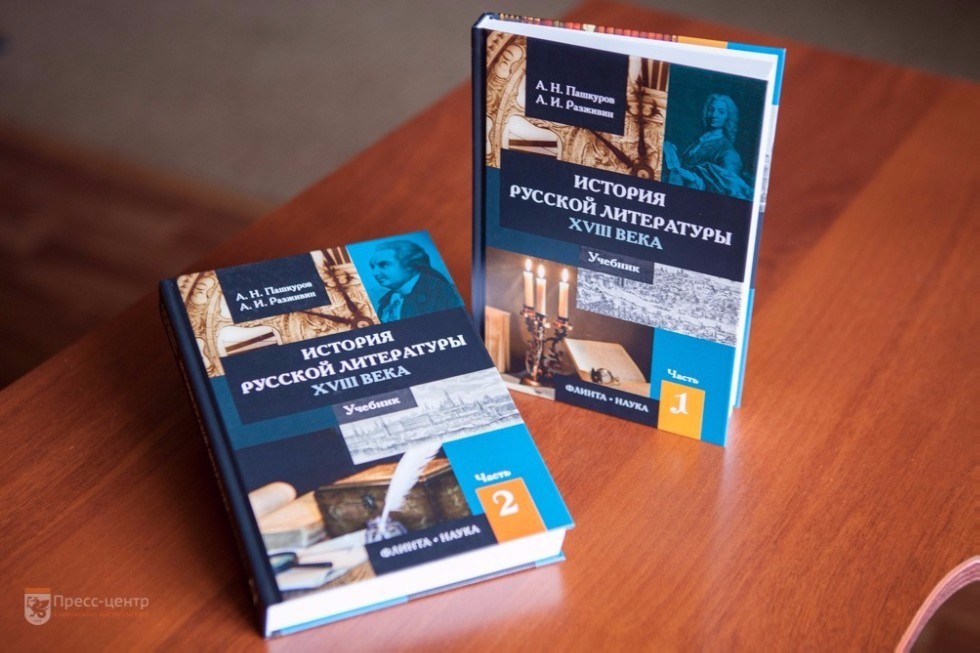 "The history of Russian literature of the XVIII century" for higher educational institutions was published in the federal publishing house "Flinta: Science". The authors are Tatarstan philologists – professors of Kazan Federal University Anatoly Razzhivin (Elabuga Institute of KFU) and Alexey Pashkurov (Institute of Philology and Intercultural Communication of the KFU).

The two-volume history of Russian literature of the 18th century contains material based on a historical and chronological background embraces a wide range of cultural, philosophical, aesthetic and historical contexts. The evolution of genres and schools of Russian literature is presented in correlation with the writers’ individual artistic systems. A number of names are introduced into the educational and methodological fields for the first time. To master the material in more systematic way, the authors offer analytical schemes that help the readers understand problems of genres, styles, literary trends, aesthetic views of writers, moreover, detailed bibliographic lists including the works of academic literature of the late 19th and early 20th centuries as well as the latest studies of the 21st century have been included in the textbook.

We asked the author Anatoly Razzhivin to comment on the new edition.

– - The collaboration and publication of a new textbook is a very important task, as many university students will be trained on it. What is the novelty of your textbook?

–"Being the authors, we understand the responsibility for it. That’s why there was an approbation - the initial small edition in our institute publishing house. Approbation of the textbook was carried out in Yelabuga and Kazan, we received positive reviews from specialists, four positive reviews were published in the journals of the VAK list, and abroad, in Belarus. And only after that we claimed to the federal publishing house.

As for the novelty, it should be noted that the XVIII century literature in such extend (two volumes) appeared in the textbook for the first time. New writers' names were introduced. Great attention is paid to the aesthetic problems proper, the philosophy of the culture history, and the foreign context is also presented. All these facts are due to the latest scientific achievements in this field.

–-Now most Russian higher educational institutions have a three-level higher professional education. Whom is the textbook addressed to?

- We took this fact into account while developing the concept of the textbook. It may be used for the training of bachelors and, what is very important, of undergraduate and postgraduate students of humanities of higher educational institutions. Content and methodological support allows a teacher to determine the amount of material in accordance with educational programs and to plan the organization of independent work of students. I’d like to note that according to the terms of the contract with the publishing house the textbook has been placed in electronic online libraries, which expands the readership.

The publication of the textbook for future teachers was fulfilled within the framework of the implementation of the priority activity of Elabuga Institute of the KFU, the strategic academic unit "Teacher of the XXI Century".

Source of information: Press Service of the Elabuga Institute of KFU