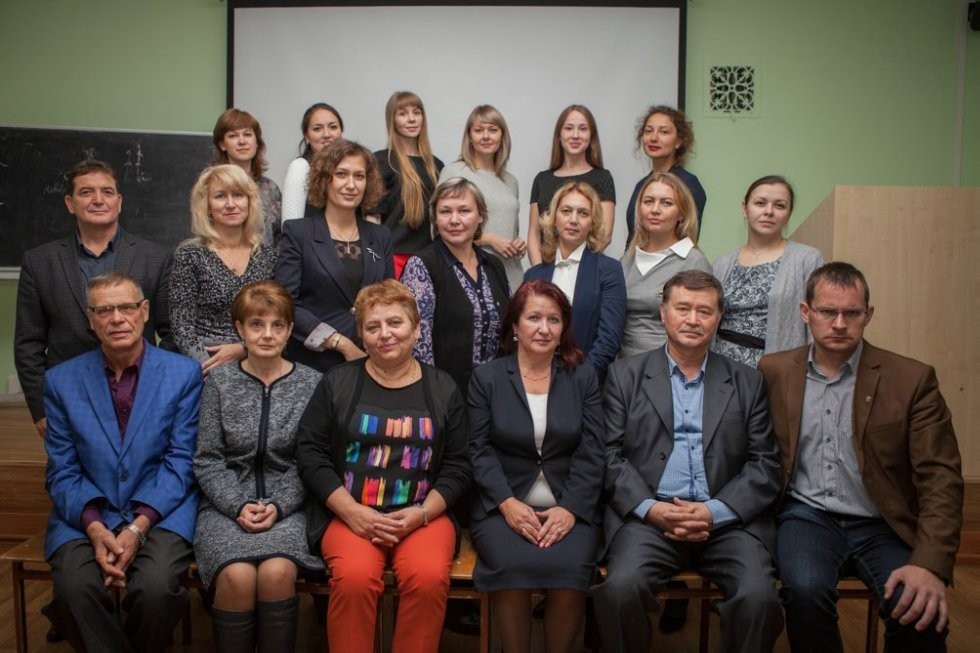 The Chair of English Philology and Intercultural Communication was created in August 2016, but the history of its formation began much earlier.

In 1962, as a result of the division of the Chair of Foreign Languages ​ ​ into two independent teams at the institute (then it was called ESPI), the Chair of the English language began working. Its basis was made up of graduates of leading universities in the country. Around the first head T.A. Zaitseva, young people, full of strength, enthusiasm and creative aspirations rallied together. They were united by the idea of ​ ​ putting the English language training in Elabuga at a high professional level. After the departure of T.A. Zaitseva for a short time, the department was headed by R.A. Volkov and G.I. Alekseeva.    And in 1967 V.P. Myasnikov, who worked in this position for 17 years, became its head. This was the period of creation and improvement of the educational and methodological complex of the chair and strengthening of its material base.

In 1983, V.V. Ovsyannikov became the head of the department - a man who left a good memory and the results of a lot of work at the ESPI. During his years in charge, teachers of the department were actively engaged in scientific work, studied in graduate school, defend dissertations. It was at this time that the chair received its new name: the Chair of English philology. Renaming the department was not just a change of signboard. It was dictated by new tasks and the new content of its work.

At the turn of the 20th and 21st centuries, Russian society entered a new stage in its development, the main feature of which was the strengthening of the role of interaction between Russians and representatives of other states. The main obstacle to such interaction became intercultural differences. In this regard, faculties of the foreign languages throughout Russia faced a new task: increasing the role of the cultural component in foreign language teaching. This very task became the initial in education at the Faculty of Foreign Languages ​​ for another chair. In July 2006, the Chair of Fundamentals of Intercultural Communications was formed.

Having common tasks, both chairs worked closely with each other in the further history of the faculty, so in August 2016, in order to reorganize the university, the Academic Council decided to merge them. The Chair of English Philology and Intercultural Communication prepares bachelors in the areas of "Pedagogical Education" and "Linguistics", which meets the requirements of our time.

Currently, the department has at its disposal all the necessary conditions for ensuring a high-quality educational process. These are lingaphone rooms, a computer class, a library, a collection of video and audio materials.

Disciplines taught at the department

Departments working in the chair

The main task of the chair is to ensure a high level of teaching of the English language using both traditional, classical methods and techniques, as well as innovative technologies.

The fund of the APIC department is constantly replenished with audio and video materials, feature films, teaching aids, scientific literature; an electronic library of copyright works of teachers of the chair is created.

Teachers of the department raise their qualifications in internships and courses which are conducted in leading universities of Russia and other states; study in graduate school; are engaged in major scientific libraries, which allow them to conduct their research work most effectively, as well as attract gifted students to it.