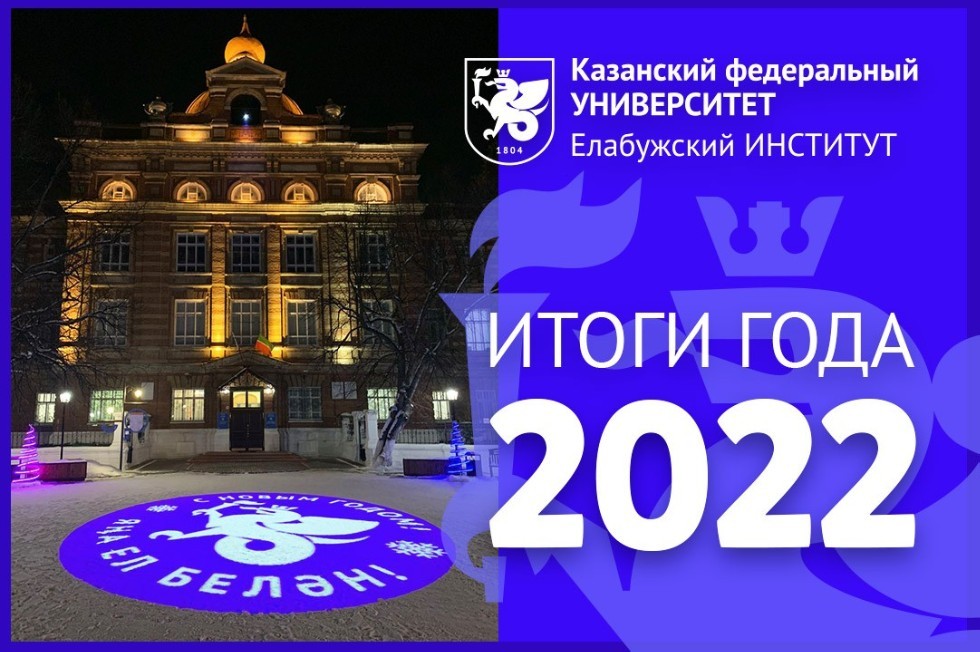 On the eve of New Year, Elena Merzon, Head of our Institute, tells some of the highlights of the past year

- Good day, Elena Efimovna. The year 2022 is ending. What does Elabuga Institute of Kazan Federal University turn over the calendar with?

This year is particularly memorable for us, because it is the time to sum up before the big anniversary, which is expected to be celebrated by the Elabuga Institute of Kazan Federal University next year.

I wonder: if the founder of Elabuga Eparchial Institute Glafira Stakheeva could imagine that the fruit of her vitality and strength of spirit, her legacy would survive not just an entire century, but entire countries and would not lose its main goal - the idea of national Enlightenment?

Just imagine that for 124 years the work within the walls of our building does not diminish for a minute, and Elabuga Eparchial Institute has become part of the university of the federal level - the Elabuga Institute of Kazan Federal University. We strive to be worthy of the memory of the great people who came before us: like them, we lay the foundation for new beginnings.

Today, the educational environment of the Elabuga Institute encompasses the full life cycle of education. While in 2020 the "University school" was included in the university, in 2022 the College was opened at the Elabuga Institute, which allowed to expand the unique educational eco-system, which was created in accordance with the principle of lifelong learning: from elementary school to the third cycle.

These are some of the major events of the outgoing year.

- Continuing to talk about memorable pages of history, please, tell us about the significant events and peculiarities of the outgoing year?

Our institute has been training pedagogical shots from time immemorial: 73% of the students of Elabuga Institute and College are future teachers.

This year, on the basis of four educational organizations of the Elabuga municipal district began its work psychological and pedagogical classes. Helping students to enter the world of pedagogy, give a try to become a teacher, try to teach and educate - this is a great responsibility for us.

Continuing the theme of science, I can say that this year we started a project to study the phenomenon of educational resilience as part of the strategic leadership program "Priority- 2030" . We face the task of developing and implementing a set of technologies to support and improve the work of educational organizations with low results to improve their resilience.

In the outgoing year, the Joint Center for Research on the History of Entrepreneurship of the Russian Regions of the Institute of Russian History of the Russian Academy of Sciences and KFU appeared in the structure of the Elabuga Institute.

Such team breakthroughs were reflected in the publishing activity. In 2022 the number of publications affiliated with the Elabuga Institute increased by 60%. Thirty-seven of them in journals indexed by Web of Science, 78 in Scopus. one hundred eighty-three publications were published in journals from the Higher Degree Commission's list.

By the way, more than 30 scientific events, including scientific and practical conferences, seminars and round tables of all-Russian and international levels, were held at the Elabuga Institute in 2022.

This tremendous work motivates to strive for new achievements, and confirms that we are moving in the right direction.

- Now, we can say firmly that we are a big family. In addition, for the family it is customary to be proud of the new generation. What successes have the students of the university, college and students of the "University" school achieved?

There is no silver lining, and the development of technologies for distance learning has given a huge number of new opportunities for both teachers and students. Today, it is possible to take part in conferences around the world while physically being in Elabuga, and our students and pupils actively use it. Moreover, our students manage to prove themselves in completely different fields.

Today at our university there are 23 scientific clubs, in which "junior" groups are organized for students of the "University" school. With the support of scientific supervisors, the students study the problems of pedagogy, psychology, linguistics and are engaged in design and programming. The work is done productively and is very often confirmed by successes to varying degrees.

In the Competition for the best scientific club of Kazan Federal University thousands of students from 120 student scientific associations and clubs presented their projects, shared their successes, and the winners of the competition for the third time became "ArteFact" - a club of archaeologists led by associate professor Albert Zufarovich Nigamaev. In addition, members of the student design and technology bureau "Eureka", awarded with a diploma in the nomination "For the originality of the idea", who work under the guidance of Professor Linar Gimazetdinovich Akhmetov, presented the university with honor. The student scientific association "Creative individuality of writers included in the circle of children's and adolescent reading", pupils of associate Professor Galina Nikolaevna Bozhkova and the scientific club "Immersion reading with linguistic and cultural dominant" under the guidance of associate professor Nadezhda Vladimirovna Pospelova received certificates of the finalists.

Our student athletes are also pleased. The men's volleyball team of the Elabuga University under the guidance of senior lecturer Rail Khadiyarovich Bekmansurov became the winner, receiving the third cup of the Spartakiad of students and postgraduates of KFU, which will now forever remain in the building of our university.

Students of the Department of Psychology and Pedagogy Andrey Budrin and Maria Belova, who are engaged in powerlifting under the guidance of Associate Professor Oleg Anatolyevich Razzhivin, received the high title of Masters of Sports of Russia.

We managed to succeed in creativity as well: The Elabuga University became the winner of the diploma for the 1st place at the “KFU Student Spring” and in the competition-review of freshmen.

The great work and high achievements of the students of the University, college and pupils of the "University" do not just serve as an example, but contribute to the emergence of new talented people who glorify the name of the University, the school with their victories in sports, creative, public competitions, projects and festivals. This year, our students became winners and laureates of the "Student of the Year-2022" competition. Platforms for learning the Tatar language have made themselves known at hackathons.

The students of the "University" showed themselves well in the "Zarnitsa", the competition "Forward, cadets". We thank their mentor, the teacher of PE of "University" school, Ramis Lenarovich Mingazov, for the successes of schoolchildren in sport.

The students of the profile IT-class, despite the preparation for the USE, prove themselves great. We already have experience of participating in large hackathons. For example, the students have developed a service for automation of work with volunteers of nature reserves on WildHack from brainz by CROC and IT solutions for national education on Tatar.Bu Hackathon dedicated to R. G. Bukharaev.

The management and teachers of the University are always ready to support student initiatives, we always encourage our students. There is a vivid example of it: in the competition "Student of the Year-2022", the head of the Department of Mathematics and Applied Computer Science Tatyana Ivanovna Anisimova became the winner of the nomination "Best teacher-educator".

- The outgoing year has become a significant one for Russians, pulled together our country around patriotism, protection and caring for the weak – this had an impact on education and science. How did this affect the Elabuga Institute of Kazan Federal University?

The 2022 year, of course, focused the attention not only of the Elabuga Institute, but also of our large country on the great values in human life: on the love for the motherland, on taking care of the close people and on helping those people, who are in need. Every citizen of Russia again realized the strength and belonging in creating a safe foundation for happiness and prosperity in the world with the beginning of a special military operation to protect the residents of the Donetsk People's Republic and the Lugansk People's Republic.

We are doing whatever we can. In September, the Elabuga Institute of Kazan Federal University invoked a share – to provide targeted aid and support to the Mariupol State University of the Donetsk People's Republic. The institute hosts events in sustaining of the families of the mobilized soldiers, just before the New Year another special fundraiser was opened for purchase necessary medicines and ordinary items for military members of the service at a special military operation.

This summer, a "University camp" was organized, based on the sports and health camp "Burevestnik": ninety-six children from the Donetsk People's Republic had the opportunity to improve their health, get acquainted with the history and culture of Russia and the Republic of Tatarstan. "Burevestnik" became a space for classes, as well as a staging ground for traveling to Elabuga, where the children visited cultural and historical heritage sites, museums, and went on excursions.

I am very proud that this camp shift for teachers and children of Donbas was fully organised by students and teachers of our institute. In the "Burevestnik" they held not only games, classes and everyday life, but also were able to find new friends. This is one of the most valuable skills: to learn to be friends and carry friendship through life.

At such moments, the awareness of the belonging to our country and our people is formed, it helps us to find energy and power to fulfill the dreams of special people and, of course, children. After all, kindness and charity is the philosophy of everybody’s life. Moreover, every person who does good deeds every day always has a little bigger heart than others.

Sincerely, I thank everyone for not being afraid to realize your opportunities, for your contribution to the development, history and glory of the Elabuga Institute.

- The most traditional part of the interview is congratulating the big family of our institute on the New Year:

Taking into account the achievements of this year, we set ourselves the highest goals. At least, to be better than today is to go better of yesterday's self. I am sure that we can pull it off.

I thank everyone involved in the life of our institute, a student and a veteran, a student of the "University" school and a teacher for their daily work, which helps to create the image of the Elabuga Institute, known not only in the Republic of Tatarstan and the Russian Federation, but also out of our country. Thanks to our joint efforts, our university is clean, bright, and comfortable to live and study in.

I would like to wish everyone; first, health and energy that will help fulfill the wildest dreams. Work for new heights, and they will submit to you!