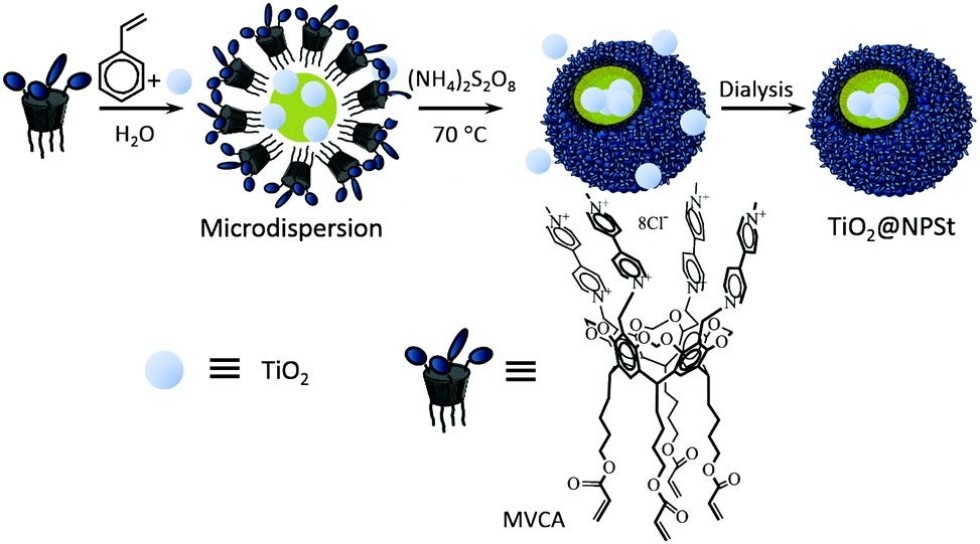 Scheme: Synthesis of NPSt in the presence of TiO2.

A paper by Kazan Federal University saw light in New Journal of Chemistry.

Photoactive materials have become extremely popular in a large variety of applications in the fields of photocatalytic degradation of pollutants, water splitting, organic synthesis, photoreduction of carbon dioxide, and others. Elza Sultanova, co-author of the paper, is engaged in researching catalytic properties of photoactive materials based on macrocycles. The project is funded by Russian Science Foundation and headed by Senior Research Associate Alexander Ovsyannikov. Employees of the Department of Organic Chemistry of Kazan Federal University, Professor Igor Antipin and Associate Professor Vladimir Burilov, also partake in the research.

Earlier in the course of research work, hollow polymer nanocontainers were obtained on the basis of a macrocyclic compound — viologencavitand and styrene as copolymer. These nanocapsules are able to thermo-responsively encapsulate substrates of various structures and stabilize various metal nanoparticles on their surface, thus forming catalytically active composites. All stages of the study were published in highly rated foreign journals (Catal. Sci. Technol., ChemPlusChem., Chem. Commun.). In this paper, nanosized composites consisting of (covalently bound viologencavitands) titanium oxide encapsulated in the cavity of a polymer matrix, and metallic nanoparticles of noble metals (palladium, platinum, gold) stabilized on the surface of the polymer matrix are obtained for the first time. The structure of the obtained nanocomposites is described by a complex of physicochemical methods.

The main point in the study of the hybrid composites is the possibility of their use in photocatalysis using the sun as a light source. After all, it is known that titanium oxide itself, being the most popular photocatalyst of our time, is limited in use when exposed to sunlight, since the latter contains only 5-8% of ultraviolet radiation.

The use of hybrid composites as photocatalysts was demonstrated on the model reaction of the photodegradation of a dye (methylene blue) in water under direct autumn sun rays at the temperature of minus 2 ° Ņ. This model reaction is convenient because it is easily controlled by UV spectroscopy, as well as visually (the color changes from blue to colorless). In the transition from pure titanium oxide to encapsulated in a polymer capsule, the photodegradation efficiency already increases 3.5 times when irradiated with sunlight. When noble metals are added to the composite, the efficiency of photocatalysis increases to 94% due to the synergistic effect of the individual components. The results obtained are a good prerequisite for the possibility of using composites for photodegradation of toxic dyes to carbon dioxide and water.

The group has developed stable organo-inorganic hybrid nanocomposites, which include a viologen-containing polymer matrix, encapsulated titanium oxide and stabilized metal nanoparticles on the surface. These composites can be used as effective photocatalysts using sunlight in the decomposition of toxic dyes to safe compounds that do not require any further chemical or physical processing.

Researchers plan to use the obtained photocatalyst based on a viologen-containing polymer and titanium oxide for photogeneration of hydrogen from water. Studies will also be continued in studying the effectiveness of hybrid composites as catalysts for photodegradation of various pollutants (organic dyes and phenols) when using sunlight as an energy source.

Photocatalytic properties of hybrid materials based on a multicharged polymer matrix with encored TiO2 and noble metal (Pt, Pd or Au) nanoparticles