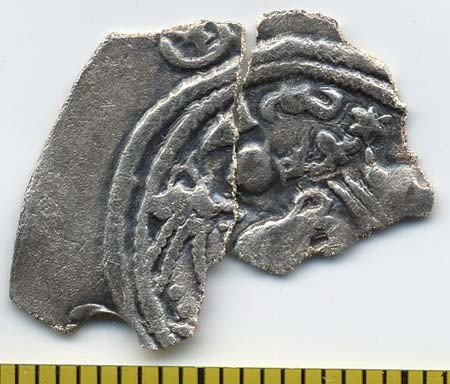 The finds of Ancient (Greek and Roman), as well as Ancient Oriental (Kushanian, Chinese) coins are known in the Middle and Low Volga regions and the Ural region. In the IIIrd-VIIth centuries AD the Sasanian (Vth-VIIth centuries), Khorezm (VIth-VIIth centuries) and Byzantine (VIth-VIIth centuries) coins appeared in the region. At the monuments of the Imenkovo culture we can find bronze ingots of standard weight (the average weigh data are located between 98 and 106 grams), which probably circulated as goods-money.

In the beginning of the Õth century in the Middle Volga and Kama regions, in the north-east of Europe, on the basis of consolidation of the Ugric-language and Turkic-language tribes, an economically well-developed state Volga Bulgaria appeared. Situated in the middle of the Volga trade route, at the confluence of the two greatest east European rivers - Volga and Kama ? it became not only a transit transfer centre, but also an active exporter of its own goods.

In the Xth century in Suvar and Bulgar the minting of the own Volga Bulgaria coins took place. Apparently, these small emissions aimed at the goals of prestige. The main means of monetary circulation in the state were silver cufic coins (dirhems) of the Arabian Khalifat countries, which played an important role in the trade in the Volga-Kama territory since the VIII century, when the Volga route was the main one to transfer the oriental silver to the eastern Slavs and further to the Baltic, Scandinavian and West European countries. In the VIII-X centuries the cufic dirhems came to the Volga and Ural regions in large quantities. Sometimes copper felses appeared in the region; extremely seldom golden dinars appeared here.

In the beginning of the XIth century the importation of the cufic coins to Europe stopped, and in the Volga Bulgaria, as well as in Rus of the XI - XII centuries, the 'coinless' period began. The means of payment during the trade deals were silver ingots or their fragments, as well as cut and pieces of the cufic dirhems. In the Volga region there were found also rare samples of the West European denariuses of the XI-XII centuries.

In the middle of the XIIIth century, earlier than in Saray, in Bulgar the minting of the Golden Horde coins began (some researchers, basing on the well-known coins with the name of khalif an-Nasir lid-Din Allah, not bearing either Jochid or Chingisid tamga, suppose that the minting in Bulgar was resumed as early as the pre-Mongol time). The level of development of the monetary circulation (especially of copper coins) in the Volga-Ural region in the Golden Horde time was so high that later it could be surpassed only during the Peter The Great reign. The minting in Ulus Jochi took place on dozens of mints, including the Volga ones - Bilyar, Bulgar, Bulgar al-Djedid, Gulistan, Kerman, Mokhsha, Saray (Saray al-Makhrusa), Saray al-Djedid, Haji-Tarkhan and Ukek.

The first East European Chingisid coins were minted in Bulgar in the name of the kaans, top rulers of the Mongol Empire, Mengu (Munke) (1251-1259) and Arig-Buga (1259-1264). The coinage in the name of the Golden Horde khans began, probably, during the reign of Mengu-Timur (1266-1282) and is connected with the complete independence of the Jochid state. The important role in the stabilisation of the monetary circulation was played during a number of decades by the money-weight reform, carried out during the khan Tokta reign in 710 A.H. (1310-1311 AD), which unified the weight of the Golden Horde silver coins. The monetary system, disturbed by the internecine wars of the 60s - 70s of the XIV century, was settled by the Toktamysh reform of 1380, according to which, like during the Tokta reform, all coins of the previous issues were exempted out of circulation. The reform of 1400, carried out during the reign of Shadibek, apparently could not completely and for long unify the money-weight system of Ulus Jochi as a whole.

On the Bulgar monuments during nearly 200 years the collection of materials, including numismatic, was carried out. The museums of Kazan, Moscow, St.-Petersburg, Bolgar, Bilyarsk, Helsinki, Samara and other cities and towns contain collections of several thousands samples. These materials promoted the appearance of the oriental Numismatics in Russia, basically thanks to the works by Ch.M.Fraehn (1782-1851), who began to study these problems at Kazan University.

Undoubted is the role of Ch.M.Fraehn in the creation of interest for the oriental Numis matics first in Kazan, and then all over Russia. Due to this interest dozens of hoards and thousands of ancient coins were later saved from destruction.

Not only Russian orientalists, but also statesmen and businessmen took part in the creation of the unique state and private collections. It is due to the efforts of these personalities that the numismatic collection of the museum of the Society of Archaeology, History and Ethnography at Kazan University, which was considered to be one of the best in Russia and which was transferred after the close of the Society to the present National Museum of the Republic of Tatarstan.

The whole collected material has played an important role in the study of not only Numismatics and History of the Volga Bulgaria and the Golden Horde, but the past of the Oriental states as well.

The numismatic material available for the authors is supposed to be presented on the University server.