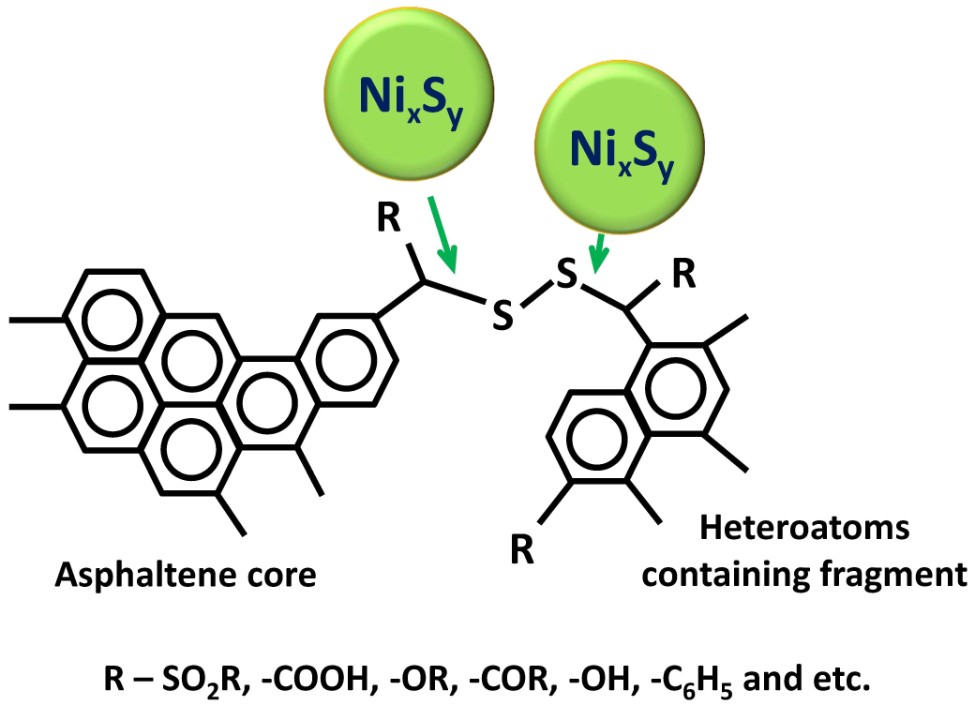 A joint paper by Kazan Federal University and Zarubezhneft appeared as a cover story in Processes.

In this publication, the authors studied transformations of asphaltenes, the compounds determining the viscosity of petroleum. The provided catalyst proved to be effective for in-situ conversion of asphaltenes.

The nickel-based catalyst precursor was introduced in order to intensify the conversion processes of heavy oil components. The active form of such catalysts—nickel sulfides—are achieved after steam treatment of crude oil at reservoir conditions. The experiments were carried out on a rock sample extracted from the depth of 1900 m. Changes in composition and structure of heavy oil after the conversion were identified using SARA-analysis, Gas Chromatography-Mass Spectroscopy of saturated fractions, FTIR spectroscopy of saturated fractions, and MALDI of resins. It is revealed that catalyst particles provide a reduction in the content of resins and asphaltenes due to the destruction of carbon-heteroatom bonds. Moreover, the destruction of C=Carom. bonds and interactions with aromatic rings are heightened. In contrast, the results of experiments in the absence of catalysts exposed polymerization and condensation of aromatic rings. The most remarkable result to emerge from the thermo-catalytic influence is the irreversible viscosity reduction of produced crude oil enhancing the oil recovery factor. Moreover, the introduction of catalysts increases the gas factor due to additional gas generation as a result of aquathermolysis reactions. The yield of methane gas is significantly high in the experimental runs with oil-saturated rocks rather than crude oil experiments.

Co-author, Senior Research Associate of KFU’s In-Situ Combustion Lab Aleksey Vakhin explains, “This is a continuation of a three-part work by Kazan Federal University and Zarubezhneft which appeared in Petroleum Science and Technology. Those publications covered transformations of petroleum under the influence of various catalysts.”

The results will also be used in a doctoral thesis prepared by another lab employee, Firdaws Aliev.

In addition, 14 metric tons of the experimental aquathermolysis catalyst (trademarked as UniCat) have been produced for field testing.