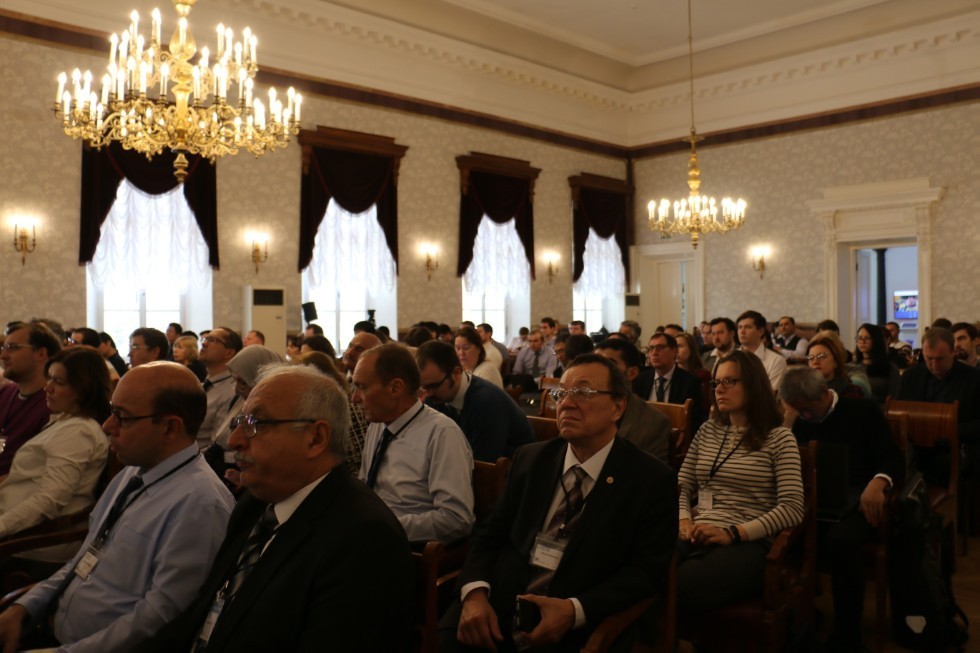 The General Chair of the conference was a Head of the Laboratory of intelligent robotic systems (LIRS) professor Evgeni Magid. Jemila Mustafina, professor of the Higher Institute of Economics and law (Naberezhnye Chelny Institute of KFU), was the General Co-Chair.

Participants presented their articles in sections related with various topics in the fields of big data analysis, digital education, applied computing, innovation and technology, Education 4.0 and Industry 4.0, Internet of Things, artificial intelligence, and others.

Apart from the guests from foreign and domestic higher education institutions and companies, the conference was attended by employees and students of LIRS, who presented a number of articles:

Modeling USAR Maps for the Collection of Information on the State of the Environment. Authors: Nikita Simakov, Roman Lavrenov, Aufar Zakiev, Ramil Safin, Edgar A. Martinez-Garcia;

Use of Virtual 3D-model for the Assessment of Premaxilla Position in the 3-4-Year-Olds with Complete Bilateral Cleft Lip and Palate - a Pilot Study. Authors: Elena Maslak, Irina Fomenko, Ilya Timakov, Tatyana Tsoy;

The winners shared their impressions of the conference:

Roman Lavrenov: "Interesting research results of scientific teams from different countries were presented at the conference. We knew that the selection was strict; therefore, we tried very hard to present our results with dignity. I am very glad that our joint work with our Mexican colleagues was recognized as the best article of the conference".

Liliya Gavrilova: "This is my first experience of participating at an international conference of this level. In my opinion, such events have a great opportunity for scientists and specialists to exchange experience and establish scientific and educational contacts with colleagues from different countries. I would also like to express special gratitude to professor Evgeni Magid and all the employees and students of the LIRS, who have a lot of organizational work behind them".

We also got comments from other conference participants and volunteers:

Aufar Zakiev, a graduate student at LIRS, participant, said: "There were a lot of new acquaintances, a huge amount of communication with scientists from different countries. There was a pleasant feeling that despite the difference between us, you can always come to an agreement on scientific and technical issues".

Elvira Chebotareva, an associate professor, PhD, participant: "I want to thank the DeSE organizers, who managed to create a unique platform for live communication between scientists, teachers and students in a favorable friendly atmosphere. I liked the workshop very much. on robot football, where students were not only able to program robot football players, but also learned about the significance and prospects of this direction."

Leila al-Yones, a volunteer: "I was very impressed with the DeSE Conference and it is a great honor to be a participant in such a large scale event. There were many guests from different countries: Iraq, Great Britain, Germany, Poland, Yemen, Brazil, India, Japan and many others. It was great to meet students and scientists from all over the world. This conference inspired me to take a more active part in scientific activities".

Artem Ivanov, a second-year undergraduate student at the Higher Institute of ITIS, a volunteer: "A well-known proverb says: "A journey of a thousand miles begins with a single step". Robotics is a very complex, sometimes dangerous, and very tortuous path. However, thanks to such a large-scale event as DeSE, and to professor Magid, who allowed to take part at the event as a volunteer, I know that I have taken a few more steps on my path towards my goals and dreams".

Nikita Simakov, a first-year student of the master's program "Intelligent robotics "at the Higher Institute of ITIS, co-author of one of the publications and a volunteer: "The event of such kind happened for the first time to me. Such events are a great experience for raising the level of your soft skills and a very good opportunity to meet new people. The most interesting, in my opinion, was a visit to the workshop with ground robots (Robot football): this small event allowed us to combine entertainment with the process of obtaining new knowledge".

The guests expressed their gratitude for the rich and fruitful conference program and hospitality, and were delighted with the level of the event.

Mikhail Svinin, a professor of Ritsumeikan University (Japan), participant: "Thank you so much for an excellent conference! Everything was very great, and we all have very pleasant experience of the trip".

The LIRS team is particularly grateful to Yulia Aukhatova for her assistance and efforts in organizing the DeSE conference.

Let us remind that the XIII International Conference of IEEE Developments in e-Systems Engineering (DeSE) will be held in 2020 in Dubai and Sharjah, UAE, continuing the success of previous DeSE conferences.