In the Kazan kindergarten Ļ188 was successfully finished series of lessons with the robot
Main page \ Academic Units \ Physics, Mathematics and IT \ Institute of Information Technology and Intelligent Systems \ Research \ Laboratory of Intelligent Robotic Systems \ News 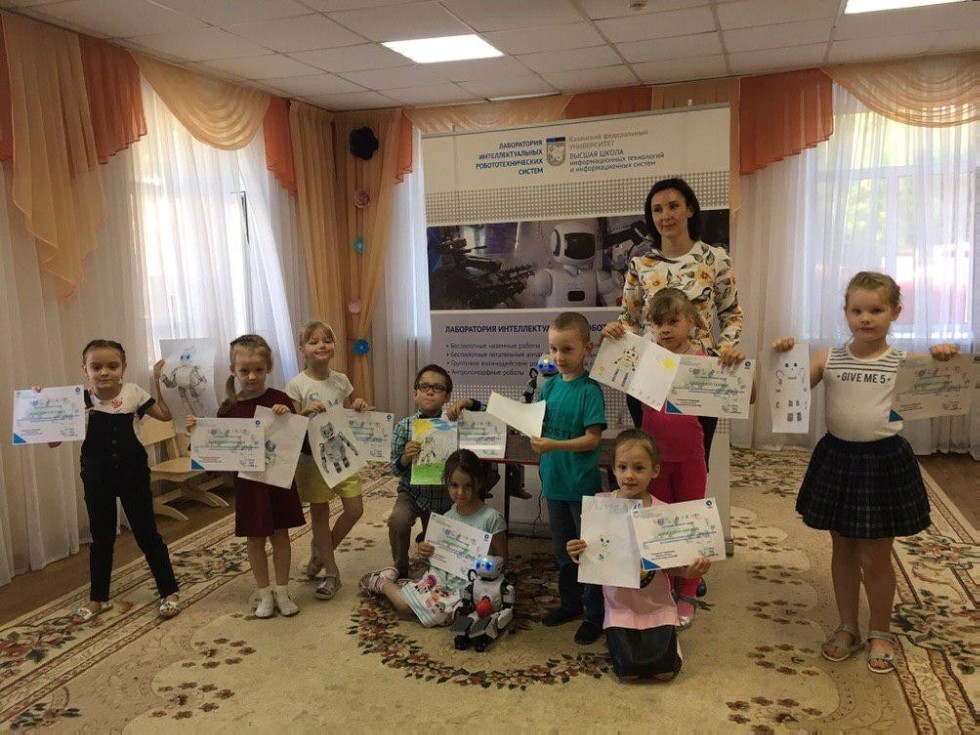 On 27th of May a finishing lesson of a set of classes with pre-school aged children was held in “The kindergarten No. 188 of combined type with Tatar language education and training”. The specific trait of these lessons was a usage of humanoid called Robotis DARwIn OP2 that was teacher's assistant. With its help, children studied numerals and new vocabulary, played games, did physical exercises and tried to remember counting rhyme.
In the beginning of lesson a Head of kindergarten Firdania Fashieva gave a speech. She noticed responsible attitude with which executors of the project, the students of the Laboratory of Intelligent Robotic Systems (LIRS) of the Higher Institute of ITIS KFU Arina Kotik and Valery Petrov, and the project manager Liliya Gavrilova organized the preparation and giving classes. Also she noticed professionalism and active assistance of Natalya Levina, an English language teacher. The project was developed under the guidance of professor of the Higher Institute of ITIS Evgeni Magid.
The last lesson was attended by parents, because they were very interested in project and experiment. In the beginning of lesson children and robot counted until 20, studied jungle animals and did some exercises. In the end they were in for a pleasant surprise – a football game with robot. Children and their parents were delighted.
Later we took a survey among parents. The results showed us the experiment was rather successful: children accepted lessons positively, also they told a lot about DARwIn at homes. According to Natalya Levina, a teacher, pupils were looking forward to every lesson and showed huge interest. After a set of the lessons Firdania Fashieva and Natalya Levina got letters of gratitude for their contribution in project realization, which is aimed to robotization of education and integration in pedagogical practice of innovative technologies. Children got personal certificates of participation in learning English language with humanoid Robotis DARwIn OP2. The lesson finished with a commemorative photo of participants with their drawn pictures of DARwIn and robot itself. The pictures are bright and colorful.
The interim analysis of results showed us that robotization makes positive outcomes on learning new vocabulary and heightening the level of learning foreign language.

‘ÓÚÓ„ūŗŰŤˇ ŤÁ žŗÚŚūŤŗŽŗ: In the Kazan kindergarten Ļ188 were successfully finished series of lessons with the robot