For the first time in the kindergarten of Republic of Tatarstan was held a lesson with a robot.
Main page \ Academic Units \ Physics, Mathematics and IT \ Institute of Information Technology and Intelligent Systems \ Research \ Laboratory of Intelligent Robotic Systems \ News 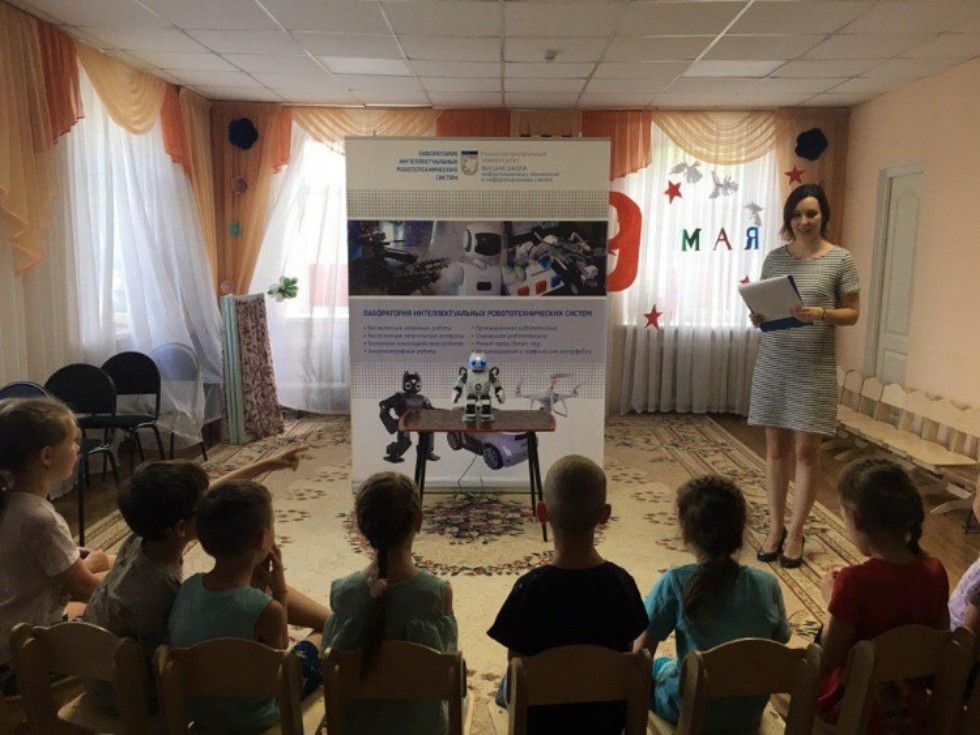 On May 13th in the kindergarten No. 188 of combined type with Tatar language education and training (a Head Fashieva Firdania Rumenovna) for the first time in the Republic of Tatarstan was held an English lesson, where the humanoid Robotis DarWin OP2 was a teacher's assistant.
Literally “DARwIn” defines Dynamic Anthropomorphic Robot with Intelligence on Open Platform. It is an affordable, miniature-humanoid-robot platform with advanced computational power, sophisticated sensors, high payload capacity, and dynamic motion ability to enable many exciting research and education activities. DARwIn OP2 was produced by South Korean company Robotis; it has high efficiency, huge computing power, diverse set of sensor devices and high dynamic performance.
An initiator of the project is Evgeni Magid, a Head of the Laboratory of Intelligent Robotic Systems (LIRS) and professor of the Higher Institute of Information Technologies and Intelligent Systems (ITIS) of KFU. Today there are several projects in LIRS that are related to humanoids where we use other types of robots; for instance, industrial, search-and-rescue, mobile, unmanned ground and aerial robots. Within the current project we decided to test possibilities of using a robot in kindergarten for increasing efficiency of learning a foreign language. Students of LIRS, Valeri Petrov and Arina Kotik, programmed the robot. For five lessons it will assist to kindergarten teacher Natalya Aleksandrovna Levina, who will act in according to the  lessons s­cripts. During the first lesson DarwIn got acquainted to children and did some physical exercises. Children liked to communicate with robot very much; after the lesson they gave plenty of questions.
Liliya Gavrilova, a co-worker of LIRS and leading executor of the current project, said: “In collaboration with my academic adviser, an assistant professor of the Department of German Philology (Institute of Philology and Intercultural Communication in KFU) Liliya Kamilevna Halitova, teacher Natalia Aleksandrovna and students, within several months we thoroughly worked on significant experiment details. Also we prepared the documents, such as parental consents, questionnaires and methods of evaluation the results. After creating the first pilot series of s­cript, Arina programmed mechanical movements of the robot, and Valery generated the verbal part of s­cript, offering more than 10 options for different voices for the robot. After that we synchronized movements and voice and carried out some pilot experiments. With the help of LIRS's stuff we improved the s­cript and algorithms of interaction of robot with children. Later we made a general rehearsal of lessons in kindergarten. We hope that obtained experiment results will give a clear picture of practicability in using robots in kindergartens with the purpose of learning foreign languages. In the beginning children felt a little embarrassed, however, they got used to the DARwIn, answered the questions and communicated with the robot and teacher.
After the lesson we summed up the results of the first introductory lesson. During the survey kids discussed the robot, its appearance and asked a lot of questions very excitedly. One girl even came up to me and asked: "Is everyone able to attend the Kazan University? I suppose it's a place only for smart ones, right?". She mentioned she really wants to study there. I advised her to study well at school and to believe in herself".