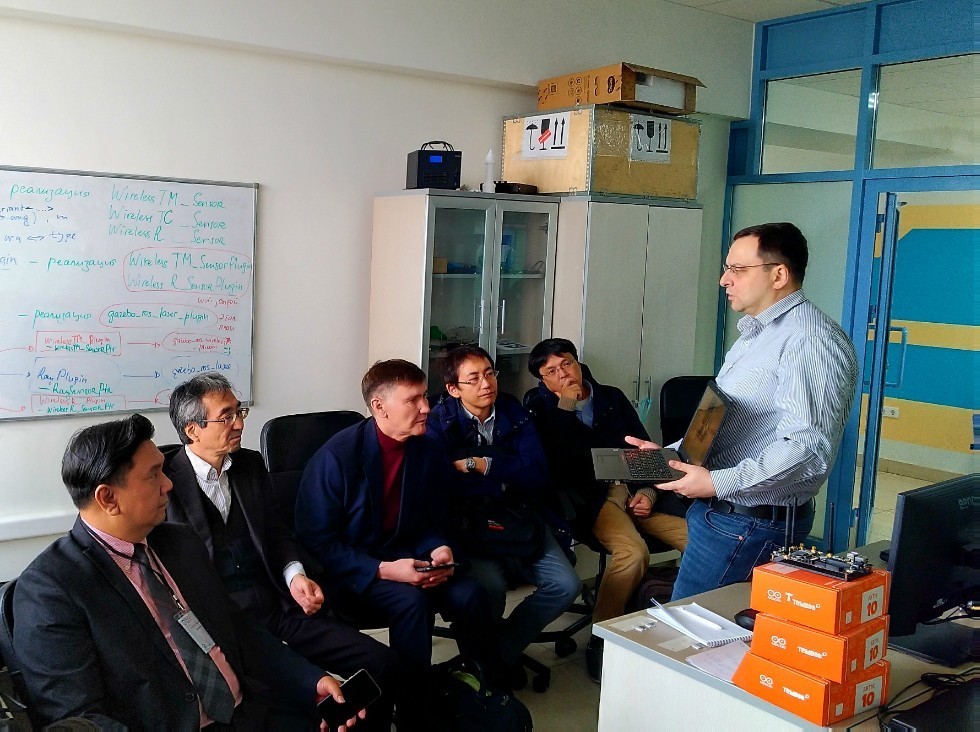 On 7th October 2019, the representatives of foreign project teams from Mahidol University (Thailand), Kyoto University (Japan) and Ritsumeikan Asia - Pacific University visited the Laboratory of intelligent robotic systems (LIRS) within the framework of international project "Information System of Emergency Situations Management in the areas of Floods and Landslides with Assistance of Distributed Heterogeneous Group of Robots". The delegation of Mahidol University was headed by the Dean of engineering faculty professor Jackrit Suthakorn; delegation of Kyoto University – by professor Fumitoshi Matsuno from the faculty of mechanical engineering; professor Mikhail Svinin led a delegation of Ritsumeikan University. The Russian team was represented by LIRS employees Aufar Zakiev and Roman Lavrenov and a head of the international project Evgeni Magid.

During the meeting, all project participants presented current results of each team and discussed future project plans. Additionally, the obtained results were represented in the framework of the special Section #21 called "Robotics and information systems for disaster management" of the XII International conference on Developments in e-Systems Engineering, DeSE 2019.

Before the meeting of the project's working groups, the laboratory was shown to the foreign delegations. The guests appreciated the technical equipment of the laboratory, its research potential and the high quality of scientific work of LIRS' students and postgraduates. Professor Mikhail Svinin shared us his impressions of the visit:

“Probably, this is the best laboratory I have ever seen in Russia. In terms of the quality of the projects being implemented here and the knowledge of the students demonstrated us during the visit LIRS is highly competitive to the world's leading laboratories”.

Mahidol University has its origins in the establishment of Siriraj Hospital in 1888 by His Majesty King Chulalongkorn (Rama V), and the hospital's medical school is the oldest institution of higher learning in Thailand, granting its first medical degree in 1893. Mahidol University has since developed into one of the most prestigious universities in Thailand, internationally known and recognized for the high caliber of research and teaching by its faculty, and its outstanding achievements in teaching, research, international academic collaboration and professional services.

Ritsumeikan Asia-Pacific University, or APU, is one of the most advanced and well-known universities in Japan. It is known for its revolutionary education system and international teaching and student stuff. Exciting and dynamic multinational atmosphere makes APU nonfungible. APU University was founded in 2000 due to the collaboration of Oita Prefecture, Beppu, and the Ritsumeikan Trust Fund. More than 2,500 students from 83 countries currently study here.