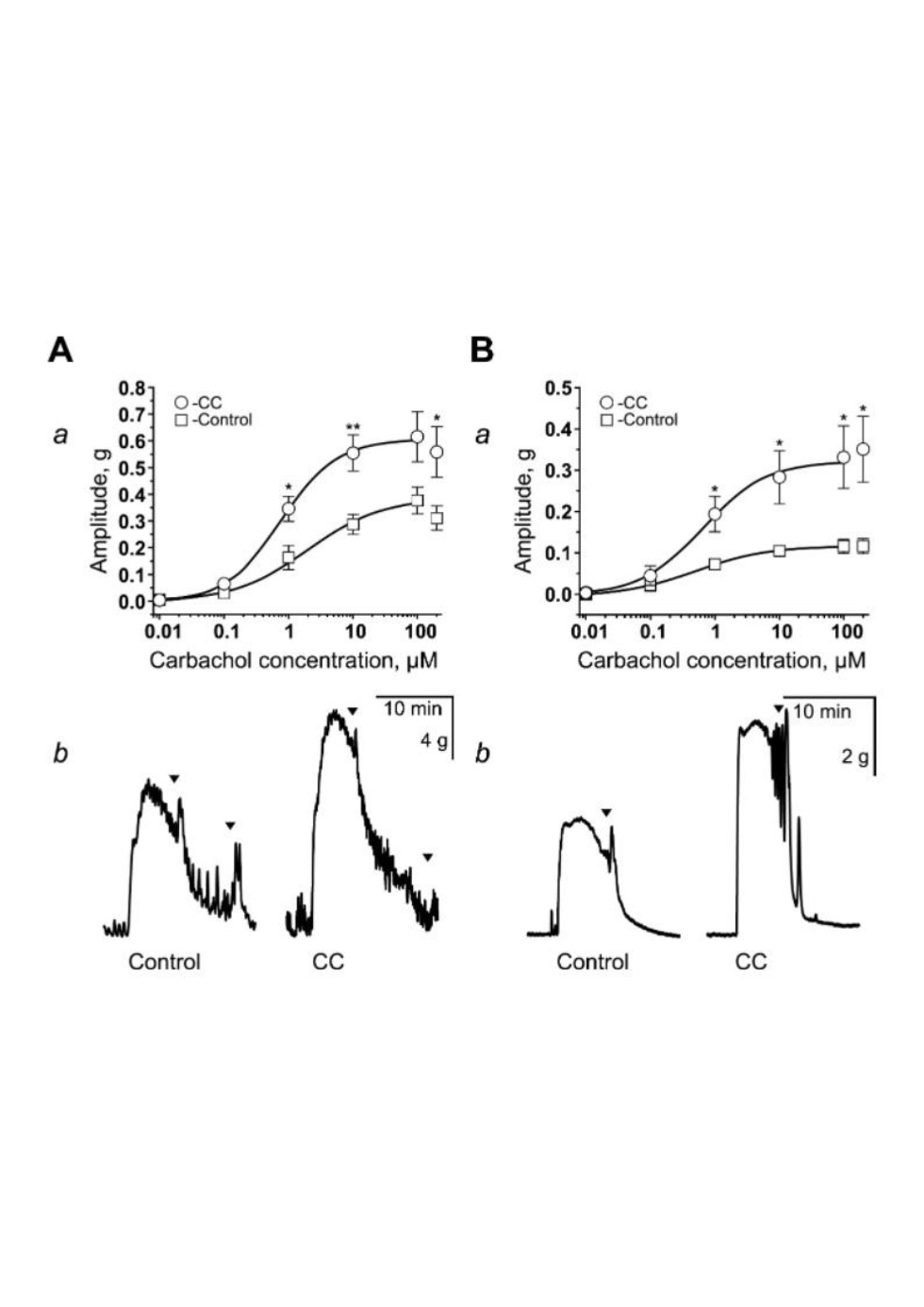 Figure: Carbachol-evoked contractions of descending colon strips from patients with CC (A, B). Dose-response effects of carbachol on the amplitude of contraction of circular (Aa) and longitudinal (Ba) muscle strips in the control (white squares) and the CC groups (white circles). The amplitudes were normalized by the weight of specimens in each experiment. * p < 0.05; ** p < 0.01. Examples of contractions of circular (Ab) and longitudinal (Bb) muscle strips in the control and the CC groups in response to the application of carbachol (10 μM).

Chronic constipation (CC) remains a serious medical and social problem because the complexity of diagnosis, the lack of a single approach to treatment, and unsatisfactory treatment results. The causes of constipation are varied - from the abnormal anatomical structure of the large intestine and its location in the abdominal cavity to impaired neurohumoral regulation of its motility, endocrine pathology, psychogenic factors, poor nutrition, as well as a combination of these factors. The mechanism of the formation of the constipation syndrome, while remaining largely unclear, is of great interest as an object of research. Understanding the pathophysiological processes in constipation syndrome can be the key to improving the methods of conservative and surgical treatment. In particular, the Republican Clinical Hospital of Tatarstan has accumulated 20 years of experience in the treatment of refractory constipation.

The objective of this particular research was to gain an insight into the role of contractility and microbiota in the etiology of CC. To this end, the scientists studied spontaneous and evoked contractile activity of descending colon segments from patients that had undergone surgery for refractory forms of CC. The juxta-mucosal microbiota of these colon samples were characterized with culture-based and 16S rRNA sequencing techniques. In patients with CC, the spontaneous colonic motility remained unchanged compared to the control group without dysfunctions of intestinal motility. Moreover, contractions induced by potassium chloride and carbachol were increased in both circular and longitudinal colonic muscle strips, thus indicating preservation of contractile apparatus and increased sensitivity to cholinergic nerve stimulation in the constipated intestine. Based on the previous data, it can be suggested that smooth muscle cells develop a compensatory response to the abnormality in cholinergic stimulation. In the test group, the gut microbiota composition was assessed as being typically human, with four dominant bacterial phyla, namely Firmicutes, Bacteroidetes, Proteobacteria, and Actinobacteria, as well as usual representation of the most prevalent gut bacterial genera. Yet, significant inter-individual differences were revealed. The phylogenetic diversity of gut microbiota was not affected by age, sex, or colonic anatomy (dolichocolon or megacolon). The abundance of butyrate-producing genera Roseburia, Coprococcus, and Faecalibacterium was low, whereas conventional probiotic genera Lactobacillus and Bifidobacteria were not decreased in the gut microbiomes of the constipated patients. As evidenced by the study, specific microbial biomarkers for constipation state are absent. The results point to a probable role played by the overall gut microbiota at the functional level. To the authors’ knowledge, this is the first comprehensive characterization of CC pathogenesis, finding lack of disruption of motor activity of colonic smooth muscle cells and insufficiency of particular members of gut microbiota usually implicated in CC.

Treatment of patients with any pathology becomes effective if it is etiopathogenetically justified, that is, it is aimed at eliminating the etiological factors of the disease and blocking the mechanisms of the development of the disease. This pilot study of the mechanisms of the formation of CC syndrome in various anatomical anomalies of the structure and location of the colon not only expands the understanding of this complex process, but is also of clinical interest. The obtained results can contribute to the choice of the optimal variant of drug stimulation of colon motility during constipation, substantiation of radical approaches to treatment, clarification of indications for the use of probiotics or intestinal microbiota transplantation. However, for a better understanding of the pathophysiological and microbiological processes in the colon in CC syndrome with subsequent clinical use of the obtained results, additional studies are needed.

Due to the small number of observations, the results of physiological and microbiological studies do not allow generalized conclusions to be drawn about specific processes in the intestine in CC syndrome, but only reflect the specifics of refractory constipation in a group of patients with a mechanical obstacle to the movement of the chyme against the background of an abnormal anatomical structure or location of the intestine. The results indicate the preservation of the molecular mechanisms of muscle tissue contraction in patients with chronic coprostasis and its increased sensitivity to cholinergic stimulation. We consider the study of other links in the regulation of motility - the enteric and central nervous systems, Cajal cells, as well as the influence of metabolites of the intestinal microbiota on the contractile activity of smooth muscle cells - as potential directions for further research. It is also advisable to study the contractile activity of the smooth muscle of the large intestine in different age groups of patients with constipation, with congenital anomalies of the autonomic innervation of the intestine and in patients with decompensation of the motor-evacuation function of the intestine against the background of prolonged use of laxatives.

According to the study, the structure of the microbial community of the large intestine of patients mainly corresponds to the normal microflora of the human intestine. Individual members of the intestinal microbiota have been identified that are capable of influencing the motor-evacuation function of the intestine due to the produced metabolites, which confirms the presence of a functional relationship between chronic constipation and the composition of the intestinal microbiota. Nevertheless, according to modern concepts, the development of coprostasis is promoted not by individual taxa, but by the entire microbial ensemble as a whole. More observations are also needed to confirm this assumption.