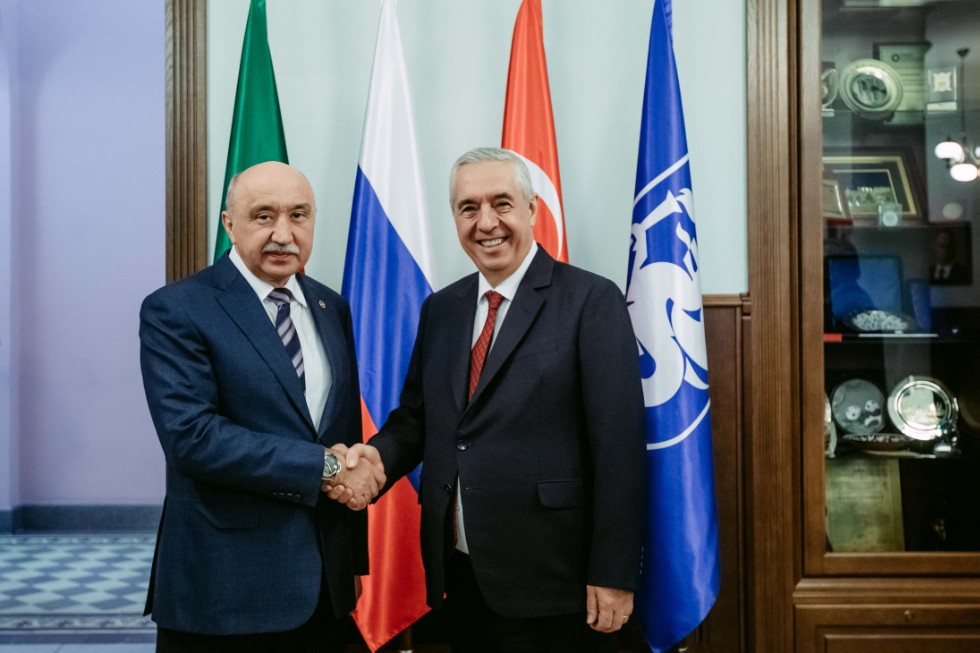 The meeting was held on 5th February.

“This is our first meeting. Given the relationship that has been established between Russia and Turkey in education, I believe that our meetings will be quite frequent. This is primarily linked to academic mobility, frequent trips of our Republic’s leadership to Turkey, business projects, and a public service training program. Today, joint research projects are quite numerous as well,” said Rector Ilshat Gafurov while welcoming the guest.

Given the well rooted contacts with Mr. Erikan’s predecessor, the Rector expressed hope for fruitful cooperation.

Dr. Latypov stated that in the the academic year 2019/2020, 92 Turkish citizens are studying at the University. Since 2015, 271 articles have been co-published by KFU and Turkish colleagues.

He also mentioned a significant joint project of the Space Research Institute of the Russian Academy of Sciences, the Astronomical Observatory of Kazan Federal University, the Committee for Scientific and Technical Research of Turkey (TUBITAK) - a 1.5-meter optical telescope in Turkey. The cooperation agreement is valid until 2028. A delegation headed by Rector Gafurov took part in celebrations and a scientific symposium at TUBITAK in September 2017.

“Since 2018, the Institute of Fundamental Medicine and Biology and Bilkent University have been working on a joint project “Development of biomaterials based on synthetic peptides,” added Vice-Rector Latypov.

Consul General Ismet Erikan called this first meeting a courtesy visit, adding that Kazan Federal University is of particular importance for the capital of Tatarstan.

“The university has a great relationship with Turkey. The university has more than 200 years of history, and students are very lucky to study here. I am sure when they become graduates, they will be proud to say that they have studied KFU. This will serve as a decoration on their CV,” he said.

During the meeting, the parties discussed ongoing work. In conclusion, the Consul General noted that the cooperation is developing fruitfully.

“We will work to improve the existing relationship,” summed up Mr. Erikan.