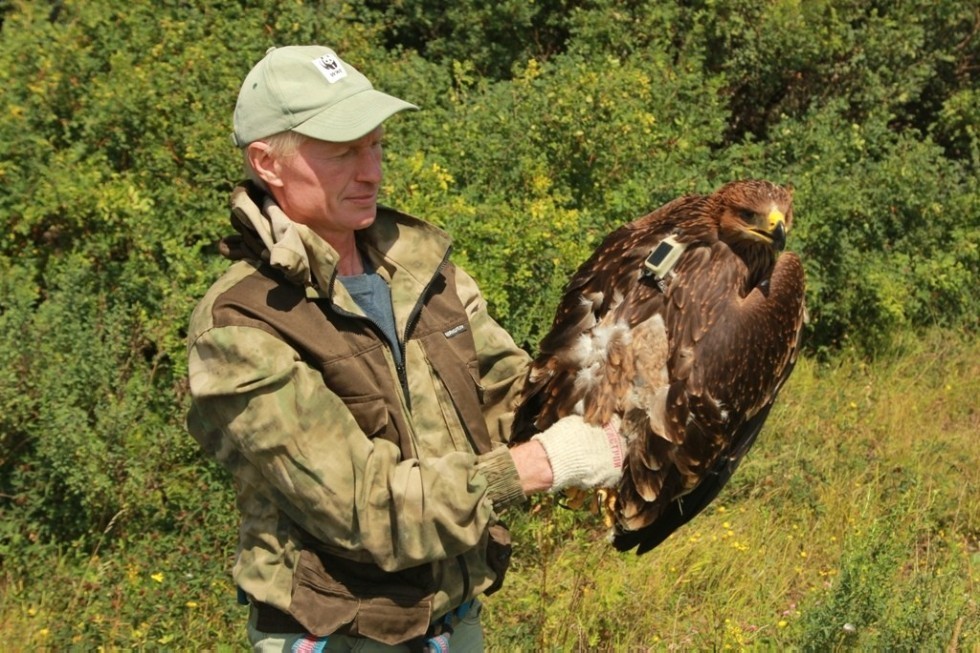 Summer is the busiest season for the researcher.

“Not long ago, when I approached a nest to tag eagle chicks, I found that one of them, a female, had a sharp branch piece stuck in her leg. The leg was already inflamed and full of pus. So I removed the branch from her and refrained from tagging her, but still tagged her brother,” says Dr. Bekmansurov.

Two weeks later, he visited the nest again and was surprised that the female youngling was alive and perfectly well, but the male died.

“The tree where the nest was built suffered from a hurricane. The birch was crooked but still stood, and the nest itself was intact. When there is danger, female eagles tend to cling to the nest, and males try to fight off the foe. It seems that the male was thrown out of the nest by the wind and perished,” explains the scientist.

He says that he has been researching this particular nesting area in Almetyevsk District, Tatarstan, for 10 years. The region has abnormal wind activity, and he has witnessed two nests ending up on the ground after tempests. However, the eagle family changed their tactics and placed this third nest lower in a defended area, so it survived.

Another story is about three younglings of eastern imperial eagles (Aquila heliaca). Officials from one of the nature preservation agencies of Tatarstan once contacted Bekmansurov and said that a local citizen had found little birds in the woods and transported them to the forestry department. The scientist distributed each of the three birds to different nests.

“I was lucky that in all three cases parents were out hunting and didn’t see me planting the younglings. Their own younglings, thankfully, also didn’t show aggression to the newcomers and were well fed. They even had some food remaining in the nest, and the new younglings immediately started consuming those remains. They were also of the same age in the first two nests, only the third one had local younglings a bit younger than mine,” says Bekmansurov.

He hopes that new birds will accustom well in their families and will be taught by the foster parents to hunt. He plans to monitor the situation.

90
Education Science Leadership Competitions Student Life International Culture Sports Cooperation News of the reception
Leave a comment
Other news and announcements
"Scientists to Schools": all-Russian lecture series was held at Elabuga Institute of Kazan Federal University
Press conference took place at the House of Scientific Collaboration.
A conference dedicated to the memory of academician Kamil Valiev took place at the House of Scientific Collaboration.
Student of the Year at Kazan Federal University 2020
Students of the Yelabuga Institute of KFU became scholars of the Academy of Sciences of the Republic of Tatarstan
Candidate thesis offers unique improvements to handwritten signature recognition
Young activists receive awards at Our Tatarstan - Land of Opportunities Forum
Yelabuga Institute KFU invites high school students to the CINEMA Stars language camp
Best science clubs of the year awarded at Kazan University
KFU has risen to the 90th position of the TNE international rating in the direction of "Education
International scientific and practical conference was held at Elabuga Institute of KFU
The phenomenon of educational resilience is investigated at the Elabuga Institute of KFU
The presentation of the Czech language study program was held at the Elabuga Institute KFU
'The Bremen Town Musicians': a scientific interpretation of an animated film
Student of the Elabuga Institute of KFU became an Ambassador Mail.ru Group
House of Scientific Collaboration opened at Yelabuga Institute
University School of Yelabuga opens doors
Rector Ilshat Gafurov contributed to the August Teachers' Conference in Yelabuga
President of Tatarstan Rustam Minnikhanov visited the University School of Yelabuga
Principal of Yelabuga University School shares info about the institution's concept
Final inspection of University School renovations conducted by Rector Ilshat Gafurov
Вход в личный кабинет
Забыли пароль? Регистрация