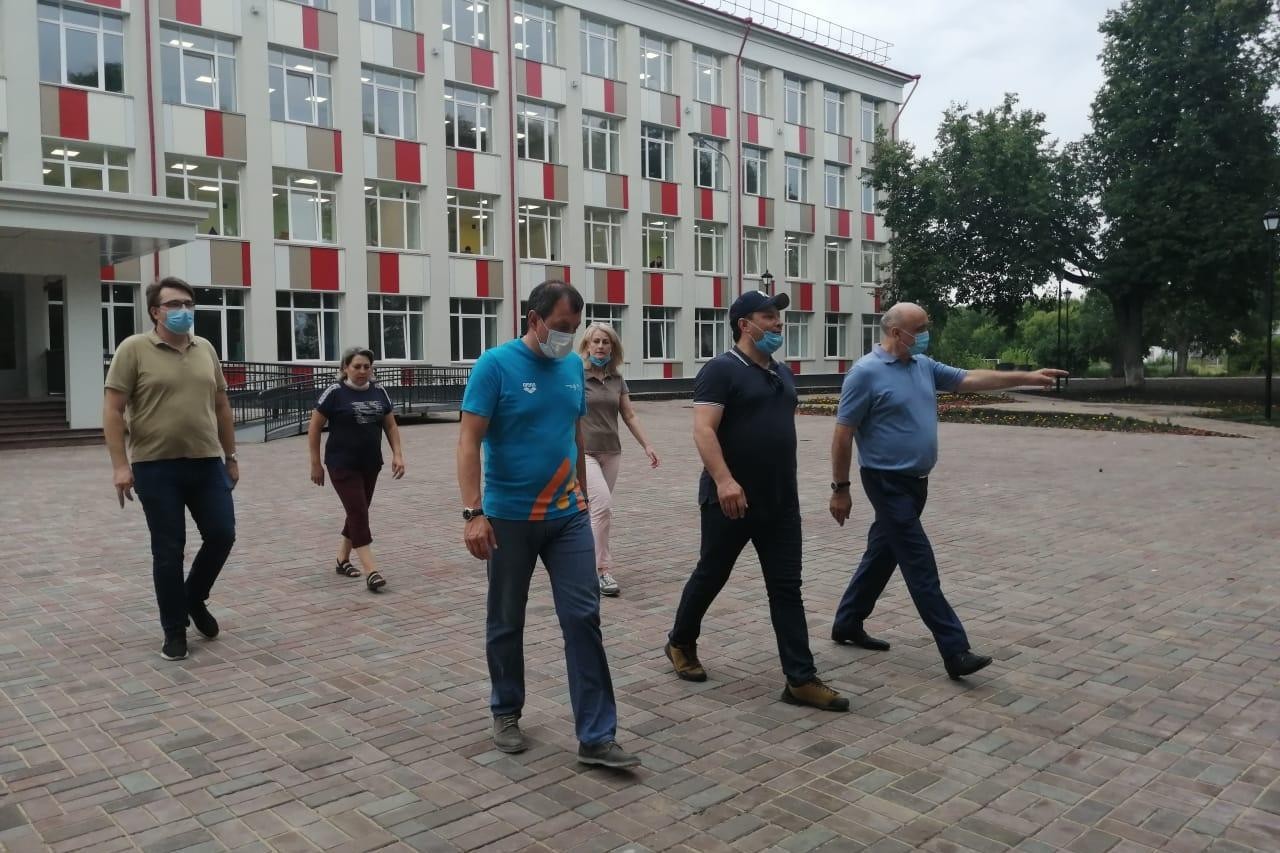 He visited the city of Yelabuga on 7th August.

The Rector was accompanied by Head of Yelabuga Municipal District Rustem Nuriev, Director of the Yelabuga Institute of KFU Yelena Merzon, and University School Principal Kamill Gareev. On 14th August, the School plans to welcome the participants of the August Convention of Education and Science Workers, including President of Tatarstan Rustam Minnikhanov.

The façade of the school building was fully reconstructed, as well as the interior walls; the latter are now painted in beige, blue, salad green, and deep green.

The classrooms have also been fully refurbished – previously only three of them had interactive equipment, and now it’s thirty. Physics, chemistry, and biology classrooms now have modern labs. While visiting the chemistry room and seeing the periodic table of elements, Rector Gafurov suggested inviting Yury Oganessian, famous physicist and eponym of the 118th element, oganesson.

Importantly, each teacher will now have an assistant – these roles will be filled by Yelabuga Institute students. The future educators will be able to acquire techniques and methodologies of teaching to be fully prepared for professional activities.

Speaking about the current results shown by local boys and girls, Rector Gafurov asked about how many pupils in Yelabuga District scored a perfect 100 at Unified State Exams this year – apparently, there were two. Meanwhile, two in-house schools of Kazan University – the IT Lyceum and the Lobachevsky Lyceum – together produced 15 of such results. However, it’s worth noting that KFU’s lyceums admit the best-performing pupils based on entrance exams, whereas the University School of Yelabuga is a standard district school serving all the neighborhoods.

The School has already announced additional enrolment, and more than 50 young people enlisted. The number may further increase before 1st September. As confirmed by the Ministry of Enlightenment of Russia, the academic year will start in a standard on-site format with personal attendance.

60
Education Science Leadership Competitions Student Life International Culture Sports Cooperation News of the reception
Leave a comment
Other news and announcements
"Scientists to Schools": all-Russian lecture series was held at Elabuga Institute of Kazan Federal University
Press conference took place at the House of Scientific Collaboration.
A conference dedicated to the memory of academician Kamil Valiev took place at the House of Scientific Collaboration.
Student of the Year at Kazan Federal University 2020
Students of the Yelabuga Institute of KFU became scholars of the Academy of Sciences of the Republic of Tatarstan
Candidate thesis offers unique improvements to handwritten signature recognition
Young activists receive awards at Our Tatarstan - Land of Opportunities Forum
Yelabuga Institute KFU invites high school students to the CINEMA Stars language camp
Best science clubs of the year awarded at Kazan University
KFU has risen to the 90th position of the TNE international rating in the direction of "Education
International scientific and practical conference was held at Elabuga Institute of KFU
The phenomenon of educational resilience is investigated at the Elabuga Institute of KFU
The presentation of the Czech language study program was held at the Elabuga Institute KFU
'The Bremen Town Musicians': a scientific interpretation of an animated film
Student of the Elabuga Institute of KFU became an Ambassador Mail.ru Group
House of Scientific Collaboration opened at Yelabuga Institute
University School of Yelabuga opens doors
Rector Ilshat Gafurov contributed to the August Teachers' Conference in Yelabuga
President of Tatarstan Rustam Minnikhanov visited the University School of Yelabuga
Principal of Yelabuga University School shares info about the institution's concept
Camp 'Burevestnik' accepts students of Elabuga and Naberezhnye Chelny institutes of KFU
¬űÓš ‚ ŽŤųŪŻť ÍŗŠŤŪŚÚ
«ŗŠŻŽŤ ÔŗūÓŽŁ? –Ś„ŤŮÚūŗŲŤˇ