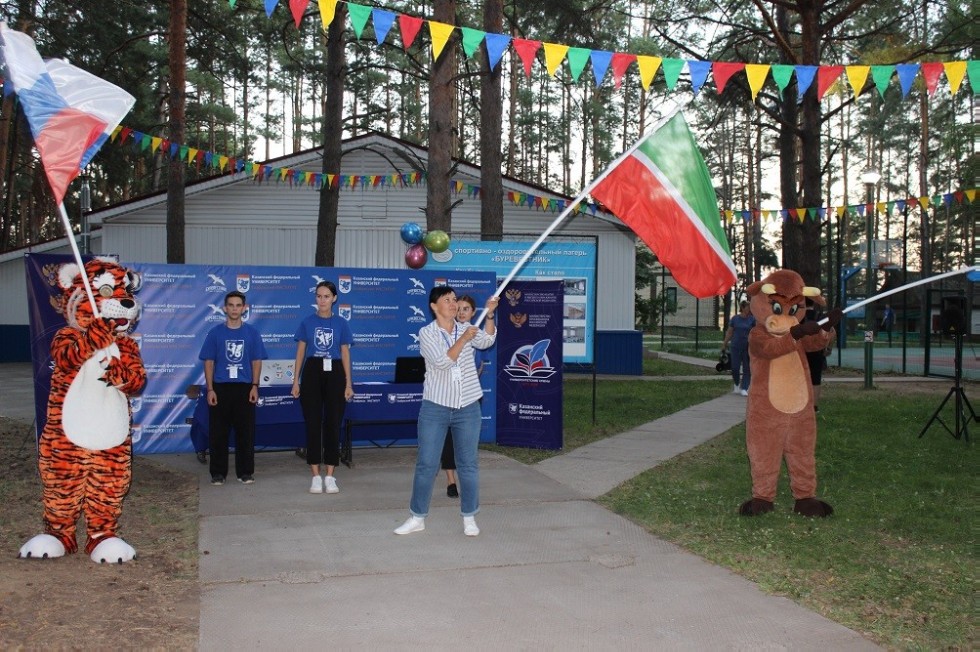 Within ten days, a profile shift camp "Together – the whole country" will be held for schoolchildren from the Donetsk People’s Republic.

On the 20th of August 96 children and their 8 attendants from the Donetsk People's Republic arrived in transit through Kazan to the sports camp of Elabuga Institute of Kazan Federal University "Burevestnik".

Within ten days, a profile shift "Together – the whole country" will be held for schoolchildren from the Donetsk People’s Republic.

"During the summer, many universities in Russia accept students from the Luhansk and Donetsk People's Republics.

And when the bid campaign began, we considered that this was an important matter, and presented the KFU in this application. Today, children from DPR schools aged from 13 to 17 years came to us, with eight accompanying teachers.

KFU will place them on the basis of Elabuga Institute – in sports camp Burevestnik. This is a unique case, since most universities accept within their main campuses.

And our guys will live in such a wonderful place, and we will organize the program so that they will see both Kazan and Elabuga, visit Naberezhnye Chelny,",explained Elena Merzon, the director of Elabuga Institute of KFU in an interview with the press office of Kazan Federal University.

By the way, a huge layer of knowledge on the history and culture of the Russian Federation and its regions is laid in the camp shift. It is worth noting that in addition to training sessions, acquaintance with our country is provided through cultural and entertainment events.

"We will devote a lot of time to the history and culture of not only our country, but also the Tatar people, nationalities who live on the territory of the Republic of Tatarstan. Of course, we will show the university and tell the schoolchildren about the opportunities offered by Russian universities.

‘We will invite them to enter Kazan Federal University,and, taking into consideration their age, it will be interesting for them,’ told Elena Efimovna.

Sightseeing tours with visits to cultural and historical heritage sites, museums, theaters, KFU institutes in Elabuga and Naberezhnye Chelny, interactive educational classes on the history and culture of Russia and Tatarstan, sports events are provided for the participants of the camp shift.

Students will work as camp leaders. University staff, teachers and psychologists are also involved in the work. The total staff is about 28 people.

‘I hope that the shift will be interesting. We understand both the responsibility and the fact that the guys are probably going to Russia for the first time, which means that their acquaintance with our country will begin with Kazan and Elabuga,’ the director of Elabuga Institute added.

‘ÓÚÓ„ūŗŰŤˇ ŤÁ žŗÚŚūŤŗŽŗ: A new camp shift for children from the Donetsk People's Republic has begun at Elabuga Institute